Role of a Lifetime: Larry Farmer and the UCLA Bruins (Hardcover) 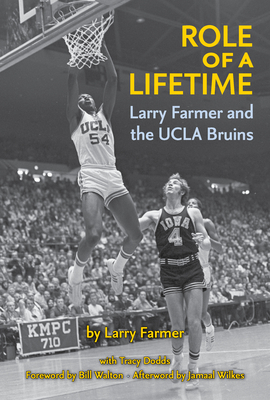 Role of a Lifetime: Larry Farmer and the UCLA Bruins (Hardcover)

Role of a Lifetime is the story of the crucial role Larry Farmer played on teams that won three NCAA titles for UCLA under Coach John Wooden. Farmer's record at UCLA was 89-1, the greatest winning percentage in NCAA history. (Kareem Abdul-Jabbar was 88-2.)

Role of a Lifetime also details how Farmer, a self-taught player from the playgrounds of Denver, managed to secure a full scholarship, make the varsity team as a sophomore, and ultimately become the head basketball coach at UCLA at the age of 30--the first black head coach for any sport at UCLA.

The book chronicles the reactions of black leaders to his role as the first black head coach, as well as the inside politics that led him to resign after three years as coach, just days after accepting a two-year extension. Farmer also shares new insights about UCLA athletic booster Sam Gilbert and his role in the team's NCAA probation.

Farmer's insider's role during UCLA basketball's most fabled period, combined with his natural ability to relate entertaining and informative anecdotes about legendary figures such as John Wooden, Bill Walton, Jamaal Wilkes, Reggie Miller, and many other famous players and coaches from throughout the world of college basketball, makes Role of a Lifetime a must-have for all Bruin fans and fans of basketball everywhere