Multiplication Is for White People: Raising Expectations for Other People's Children (Paperback) 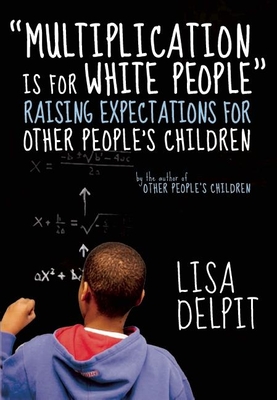 Multiplication Is for White People: Raising Expectations for Other People's Children (Paperback)


Available to Order - Usually Arrives in Our Store in 4 to 7 Days
From the MacArthur Award-winning education reformer and author of the bestselling Other People's Children, a long-awaited new book on how to fix the persistent black/white achievement gap in America's public schools

As MacArthur Award-winning educator Lisa Delpit reminds us--and as all research shows--there is no achievement gap at birth. In her long-awaited second book, Delpit presents a striking picture of the elements of contemporary public education that conspire against the prospects for poor children of color, creating a persistent gap in achievement during the school years that has eluded several decades of reform.

Delpit's bestselling and paradigm-shifting first book, Other People's Children, focused on cultural slippage in the classroom between white teachers and students of color. Now, in Multiplication Is for White People, Delpit reflects on two decades of reform efforts--including No Child Left Behind, standardized testing, the creation of alternative teacher certification paths, and the charter school movement--that have still left a generation of poor children of color feeling that higher educational achievement isn't for them.

In chapters covering primary, middle, and high school, as well as college, Delpit concludes that it's not that difficult to explain the persistence of the achievement gap. In her wonderful trademark style, punctuated with telling classroom anecdotes and informed by time spent at dozens of schools across the country, Delpit outlines an inspiring and uplifting blueprint for raising expectations for other people's children, based on the simple premise that multiplication--and every aspect of advanced education--is for everyone.

MacArthur Award-winning education reformer and scholar Lisa Delpit is the author of "Other People's Children" and the co-editor of "The Real Ebonics Debate," "Quality Education as a Constitution Right," and "The Skin That We Speak." She is Felton G. Clark Professor of Education at Southern University in Baton Rouge, Louisiana, where she lives.

Praise for Lisa Delpit and Multiplication Is for White People:

[Delpit] focuses urgently on the issue of expectationand the solutions she proposes feel both simple and radical.
The Boston Globe

[Delpit] is a keen student of the way that ideas and practices take on new meanings in cultural contexts, including the context of unequal power.
The Nation

All readers can appreciate this thought-provoking book. . . .The quality of education that Delpit advocates for Black children is a high but necessary bar, one that all children need and deserve.
Harvard Educational Review

Anyone concerned with the state of American schooling will find Delpits smooth blending of the personal, the professional, and the political appealing and illuminating.
Publishers Weekly

At a time when deep thinking about education dilemmas is in short supply, Delpit has produced a volume that forces us to do just that.
Pedro Noguera, author of The Trouble with Black Boys and executive director of the NYU Metropolitan Center for Urban Education

We must heed her words of wisdom.
Diane Ravitch, author of The Death and Life of the Great American School System

Clearly articulated discussions about educating young children, teaching adolescents, and working with students at the university level and beyond reflect Delpits knowledge and passion about teaching all children. Summing Up: Highly recommended.
Choice