The World According to Monsanto: Pollution, Corruption, and the Control of Our Food Supply (Paperback) 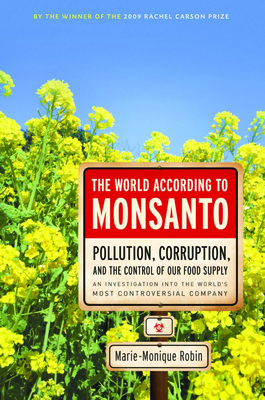 By Marie-Monique Robin
Please email or write store for pricing and availability information.
Special Request - May Not Be Available

Published to stellar praise worldwide, The World According to Monsanto charts award-winning journalist and documentary filmmaker Marie-Monique Robin's three-year journey across four continents to uncover the disturbing practices of multinational agribusiness corporation Monsanto. The book exposes the shocking story of how the new "green" face of the world's leading producer of GMOs (genetically modified organisms) is no less malign than its PCB--and Agent Orange--soaked past. Monsanto currently controls the majority of the yield of the world's genetically modified corn and soy--ingredients found in more than 95 percent of American households--and its alarming legal and political tactics to maintain this monopoly are the subject of worldwide concern, with baleful consequences for the world's small-scale farmers. Selected as a finalist for the New York Public Library's 2011 Helen Bernstein Book Award for Excellence in Journalism, The World According to Monsanto is positioned to increase awareness of a serious threat to our food supply.

Marie-Monique Robin is an award-winning journalist and filmmaker. She received the 1995 Albert-Londres Prize, awarded to investigate journalists in France. She is the director and produce of over thirty documentaries and investigative reports filmed in Latin America, Africa, Europe, and Asia. She lives outside Paris. George Holoch has translated more than twenty books, including Notes on the Occupation by Eric Hazan and Offshore by Alain Deneault (both from The New Press). He lives in Hinesburg, Vermont.

Robin’s outrage is well supported by wide-ranging scientific evidence . . . even lay readers are prodded to wise up and increase their awareness of what has become a serious threat.
—Kirkus Reviews

Sends chills down the spine. . . . After reading this, we can no longer afford to turn a blind eye.
—Le Point