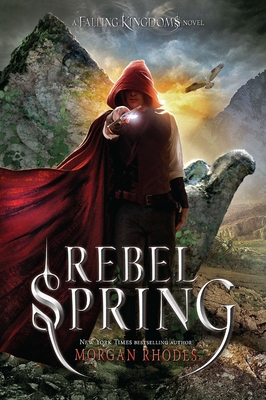 This is book number 2 in the Falling Kingdoms series.

War brought them together. Love will tear them apart.

This fantastic second installment of the Falling Kingdoms series picks up in the middle of thrilling drama that made the first Falling Kingdoms novel a New York Times bestseller. The kingdom of Auranos--and Princess Cleo along with it--has been conquered and the three kingdoms of Auranos, Limeros, and Paelsiaare now unwillingly united as one country called Mytica. But alluring, dangerous magic still beckons, and with it the chance to rule not just Mytica, but the world. When King Gaius announces that a road is to be built into the Forbidden Mountains, formally linking all of Mytica together, he sets off a chain of cataclysmic events that will forever change the face of this land.
Morgan Rhodes is the New York Times bestselling author of the Falling Kingdoms series. Under another pen name, she's an award winning author of more than two dozen novels. Morgan lives in Southern Ontario, where she’s currently hard at work on the next Falling Kingdoms book.

PRAISE for the FALLING KINGDOMS series:

"Morgan Rhodes has created a rich, living fantasy world and characters that immediately draw the reader in. This is one of those series you can't help but be obsessed with. I can't wait to see what happens next!" —Richelle Mead, #1 New York Times bestselling author of the Vampire Academy and The Glittering Court

“…You must have this book on your shelves.” —Bustle

“Falling Kingdoms is a superbly written and character-driven narrative.” —Bookpage

“[A] YA Game of Thrones full of intrigue, betrayal, lies and love.” —The Guardian

"Falling Kingdoms will gut you emotionally. It will make you ache, cry, and beg for the sequel as you turn the last page. I absolutely loved it." —Julie Kagawa, New York Times bestselling author of The Iron Queen

“In this Game of Thrones-esque high fantasy, Rhodes has created a world that’s raging with war, deceit, spoiled royals, and a populous needing little to spark a revolution.” —NPR/WAMC’s The Roundtable

"From an opening dripping with blood, magic, and betrayal through complex interweaving plots detailing treachery, deceit, and forbidden love, this novel is the first in a projected series that will immediately engage readers and keep them intrigued.” —Booklist