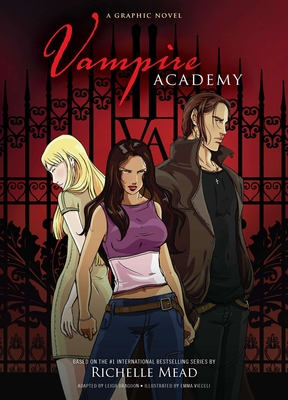 This is book number 1 in the Vampire Academy series.

After two years on the run, best friends Rose and Lissa are caught and returned to St. Vladimir's Academy, a private high school for vampires and half-bloods. It's filled with intrigue, danger - and even romance. Enter their dark, fascinating world through a new series of 144-page full-color graphic novels. The entire first Vampire Academy novel has been adapted for book one by Leigh Dragoon and overseen by Richelle Mead, while the beautiful art of acclaimed British illustrator Emma Vieceli brings the story to life.
Emma Vieceli is a professional artist and writer based just outside of Cambridge in the UK. Her credits include work on the Manga Shakespeare series (Amulet Books), My Little Pony (Hasbro), Comic Book Tattoo (image) and Girl comics (Marvel).

Richelle Mead lives in Seattle and is the author of the international bestselling Vampire Academy series. When not writing, she can be found watching bad movies, inventing recipes, and buying far too many dresses.

“We’re suckers for it.” —Entertainment Weekly

“Richelle Mead's Vampire Academy saga is set to be the next young adult paranormal series to become a household name.” —The Huffington Post

“…Mead knows her folklore, using it to great advantage in crafting a credible back story for the friction between her good and evil vampires.” —The Miami Herald

“Vampire Academy is on an entirely different playing field than Twilight…Rose shows no signs of codependency; she’s the Sasha Fierce of Vampires, kicking ass and taking names.” —Miami New Times

“[The Vampire Academy series] improves with each installment, as [Mead] keeps readers on the edge of their seats while adding unexpected twists.” —Associated Press

“Vampire Academy…is taking a bite out of the publishing world.” —Associated Press

“…Vampire Academy heroine Rose Hathaway [is] a combination of Buffy the Vampire Slayer and Angelina Jolie in Tomb Raider.” —The Seattle Times