Opium Culture: The Art and Ritual of the Chinese Tradition (Paperback) 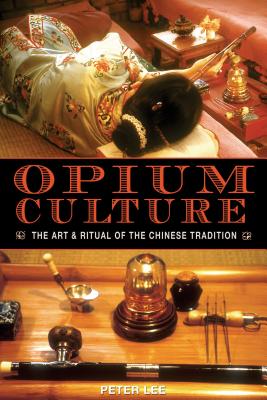 Opium Culture: The Art and Ritual of the Chinese Tradition (Paperback)

• Details the opium practices adhered to in the Chinese tradition

Opium. The very sound of the word conjures images of secret rooms in exotic lands, where languid smokers lounge dreamily in a blue haze of fragrant poppy smoke, inhaling from long bamboo pipes held over the ruby flame of the jade lamp. Yet today very little accurate information is available regarding a substance that for 300 years was central to the lives of millions of people throughout the world.

In Opium Culture Peter Lee presents a fascinating narrative that covers every aspect of the art and craft of opium use. Starting with a concise account of opium’s long and colorful history and the story of how it came to be smoked for pleasure in China, Lee offers detailed descriptions of the growing and harvesting process; the exotic inventory of tools and paraphernalia required to smoke opium as the Chinese did; its transition from a major healing herb to a narcotic that has been suppressed by the modern pharmaceutical industry; its connections to the I Ching, Taoism, and Chinese medicine; and the art, culture, philosophy, pharmacology, and psychology of this longstanding Asian custom. Highlighted throughout with interesting quotes from literary and artistic figures who were opium smokers, such as Jean Cocteau, Pablo Picasso, Herman Melville, and Samuel Taylor Coleridge, the text is studded with gems of long forgotten opium arcana and dispels many of the persistent myths about opium and its users.
Peter Lee was born in Peking, China, in 1936. He studied at the University of California at Berkeley and the Sorbonne in Paris and has worked as a writer, translator, magazine editor, and professor. He now lives in retirement in Thailand.

"In this book, the timeless mysteries of opium, the nectar of the gods that has entranced alike the seekers, visionaries, and lost of the ages, are delved with an intimacy and depth of knowing as never before. This is, simply and superlatively, the best and most entrancing exploration into the fabulous, forbidden, and little-understood world of opium; simply and superlatively, the only book written from within that world, the only book about opium worth reading through which one truly may enter that world."
— Nick Tosches, author of Hellfire and Power on Earth

"Every aspect of opium is covered, from how it came to be smoked for pleasure in China to its connections to Taoism, Chinese medicine and traditional Asian custom. Add quotes and insights from literary and artistic figures and you have a text which is packed with sociological insights."
— Diane Donovan, California Bookwatch, May 2006

"Unique among books on the topic, [Opium Culture] takes a nativist view of the customs surrounding opium in China, dispersing the romance and propaganda that have clouded this most storied of vices. Opium is presented as herbal medicine whose alkaloids produce a hardy balance of effects that aren’t stuporous, but stimulating."
— Charles Hayes

"This book is among the best I have read on this powerful plant medicine that is so important in traditional and modern medicine. Any student, health professional, herbalist, ethnobotanist, lover of Chinese culture, or person interested in the history of medicine will want to own and read this book."
— Steven R. King, Ph.D., HerbalGram, No. 75