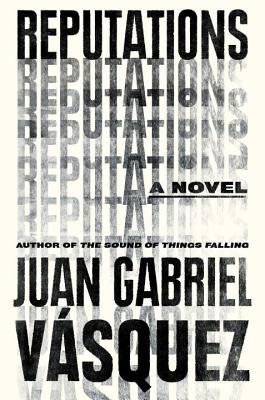 By Juan Gabriel VÁSquez
$25.00
Special Request - May Not Be Available

Columbian political cartoonist Javier Mallarino is at the pinnacle of his 40 year career. He’s known as the conscience of a nation, and holds the power to influence national events and make or break political fortunes.  A chance encounter with a young woman he knew when she was a child triggers a memory of an event that occurred many years earlier, an event so repugnant to him that his reactive cartoon leads to a death.  Now he wonders if his eyes and heart had deceived him.  The existential crisis that follows is as gripping as a thriller and as emotionally powerful as one of my all-time favorites, Julian Barnes’s The Sense of an Ending. -Cathy Langer, lead buyer

“With direct and forceful narrative and a translation as smooth and peaceful as the quiet narrator himself, this book takes the reader on a days-long search for the past and the present in modern day Bogota. A prominent political cartoonist is shaken when a forgotten uncertainty from the past resurfaces. This psychological study of the concept that what we believe makes us who we are is a masterpiece!”
— Nicole Magistro (W), The Bookworm of Edwards, Edwards, CO

A brilliant novel about the power of politics and personal memory from one of South America's literary stars, the New York Times bestselling author of The Sound of Things Falling.

Javier Mallarino is a living legend. He is his country's most influential political cartoonist, the consciousness of a nation. A man capable of repealing laws, overturning judges' decisions, destroying politicians' careers with his art. His weapons are pen and ink. Those in power fear him and pay him homage.

After four decades of a brilliant career, he's at the height of his powers. But this all changes when he's paid an unexpected visit from a young woman who upends his sense of personal history and forces him to re-evaluate his life and work, questioning his position in the world.

In Reputations, Juan Gabriel Vásquez examines the weight of the past, how a public persona intersects with private histories, and the burdens and surprises of memory. In this intimate novel that recalls authors like Coetzee and Ian McEwan, Vásquez plumbs universal experiences to create a masterful story, one that reverberates long after you turn the final page.

Named a Best Book of the Year by the New York Times, Newsweek, the Guardian, and Kirkus

Juan Gabriel Vásquez's previous books include the 2014 International IMPAC Dublin Literary Award winner and national bestseller, The Sound of Things Falling, as well as the award-winning The Informers, The Secret History of Costaguana, and the story collection Lovers on All Saints' Day. Vásquez's novels have been published in twenty-eight languages worldwide. After sixteen years in France, Belgium, and Spain, he now lives in Bogotá.

Anne McLean translates Latin American and Spanish novels, short stories, memoirs, and other writings. She has twice won both the Independent Foreign Fiction Prize and the Premio Valle Inclán, and received the International IMPAC Dublin Literary Award with Juan Gabriel Vásquez for his novel The Sound of Things Falling. She lives in Toronto.

"Reputations is a profound, exquisitely observed, suspenseful and deeply moving novel. It confirms his status as one of the very finest writers of our time." —San Francisco Chronicle

"[A]n account of an old cartoonist eyeing his past and the shifting forms of perception, memory and truth. Brilliant." —Financial Times

"Vásquez is a penetrating force, and the most pressing Colombian writer today… Reputations is a powerful, concentrated achievement. It makes clear that our memories, and even the things we've forgotten, can come back to haunt us and make us question the true cost of our actions.” —NPR

"[S]pare but powerful.... A brisk and sophisticated study of a conscience in crisis." —Kirkus (STARRED)

“In this quick, disquieting read, internationally acclaimed Colombian writer Vásquez explores the reaches of the power employed almost casually by a famous and influential political cartoonist…Vásquez has crafted an effective indictment of sacred cows, no matter how well-meaning and clever.” —Booklist

“Vásquez's prose is luminous, the spooling and unspooling of his characters’ thoughts convincing and powerful.” —Publishers Weekly

“The passing of Gabriel García Márquez certainly left a void in the literary world, but if there is a contemporary author capable of redirecting readers’ attention back to Colombian fiction it is Juan Gabriel Vásquez… Apart from the inventive plot and Vásquez’s knack for colorful similes, the writer’s mastery of tense shines throughout the novel, which dances from the present to the past to the future… The reader is left with plenty to ponder regarding morality and intention, the business of exposing hypocrisy, the dangers of fame, and the malleability of memory.” —Nylon

"Vásquez, who likely came to your attention with 2010’s scathing The Informers and certainly made your reading list with The Sound of Things Falling, the 2014 International IMPAC Dublin Literary Award winner, returns with a reverberant new work about a life suddenly challenged... [The] response has been ecstatic." —Library Journal

"The narrative escalates, the mystery deepens, and the scope of the story widens with each page. This terrific novel draws on Colombia's tragic history and cycles of violence to tell the story of a troubled man trying to come to grips with the distant forces and events that have shaped his life."
—Khaled Hosseini

"A fine and frightening study of how the past preys upon the present..."
—John Banville

"I felt myself under the spell of a masterful writer. Juan Gabriel Vásquez has many gifts--intelligence, wit, energy, a deep vein of feeling--but he uses them so naturally that soon enough one forgets one's amazement at his talents, and then the strange, beautiful sorcery of his tale takes hold."
—Nicole Krauss

"Juan Gabriel Vásquez is one of the most original new voices of Latin American literature."
—Mario Vargas Llosa

"For anyone who has read the entire works of Gabriel García Márquez and is in search of a new Colombian novelist... a thrilling new discovery."
—Colm Tóibín


Praise for The Sound of Things Falling

"[A] Brilliant new novel...gripping...absorbing right to the end. The Sound of Things Falling may be a page turner, but it's also a deep meditation on fate and death." —Edmund White, The New York Times Book Review

"Like Bolaño, [Vásquez] is a master stylist and a virtuoso of patient pacing and intricate structure, and he uses the novel for much the same purpose that Bolaño did: to map the deep, cascading damage done to our world by greed and violence and to concede that even love can’t repair it." —Lev Grossman, Time Magazine

"Juan Gabriel Vasquez is a considerable writer. The Sound of Things Falling is an artful, ruminative mystery... And the reader comes away haunted by its strong playing out of an irreversible fate." —E. L. Doctorow

“An undoubted talent… Introspective and personal.” —The Wall Street Journal

“The Sound of Things Falling is a masterful chronicle of how the violence between the cartels and government forces spilled out to affect and corrode ordinary lives. It is also Vásquez's finest work to date….  His stark realism — the flip side of the magical variation of his compatriot Gabriel Garcia Marquez — together with his lyrical treatment of memory produces both an electrifying and a sobering read.” —Malcolm Forbes, San Francisco Chronicle

“Haunting… Vásquez brilliantly and sensitively illuminates the intimate effects and whispers of life under siege, and the moral ambiguities that inform survival.” –Cleveland Plain Dealer