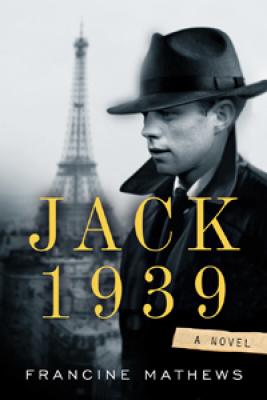 By Francine Mathews
$16.00
Available to Order - Usually Arrives in Our Store in 4 to 7 Days

It’s the spring of 1939, and the prospect of war in Europe looms large. The United States has no intelligence service. In Washington, D.C., President Franklin Roosevelt may run for an unprecedented third term and needs someone he can trust to find out what the Nazis are up to. His choice: John F. Kennedy.

It’s a surprising selection. At twenty-two, Jack Kennedy is the attractive but unpromising second son of Joseph P. Kennedy, Roosevelt’s ambassador to Britain (and occasional political adversary). But when Jack decides to travel through Europe to gather research for his Harvard senior thesis, Roosevelt takes the opportunity to use him as his personal spy. The president’s goal: to stop the flow of German money that has been flooding the United States to buy the 1940 election—an election that Adolf Hitler intends Roosevelt lose.

In a deft mosaic of fact and fiction, Francine Mathews has written a gripping espionage tale that explores what might have happened when a young Jack Kennedy is let loose in Europe as the world careens toward war. A potent combination of history and storytelling, Jack 1939 is a sexy, entertaining read.

Francine Mathews is the author of more than twenty novels of mystery, history, and suspense. Her historical thriller The Alibi Club was named one of the fifteen best novels of 2006 by Publishers Weekly. A graduate of Princeton and Stanford, she spent four years as an intelligence analyst at the CIA and presently lives and works in Colorado.

“The pace is so propulsive that you’ll read every word… Mathews’s ability to weave fact into her tale is nothing short of remarkable… there are precious few entertainments this captivating.”—The Washington Post

“One of the most deliciously high-concept thrillers imaginable.”—The New Yorker

“A brisk thriller that defies the odds… It's no small feat to take a historic figure who looms as large in real life as John F. Kennedy, place him in an improbable fantasy and not strain credulity. But in this case, Mathews has accomplished her mission.”—USA Today

“Francine Mathews has a way of making you believe that improbable situations just might be true… Jack 1939 is a complicated thriller, filled with trust and betrayal.”—Denver Post

“A rollicking adventure story… an awful lot of fun.”—Financial Times

“Imaginative, well-researched… an intriguing look at pre-WWII politics, both in the U.S. and Europe, as well as a meticulous character study of the future president.”—Publishers Weekly

“Filled with memorable characters both fictional and historical, Mathews provides an edge-of-the-seat journey, filled with haunting images that readers won’t soon forget… Aficionados of espionage fiction, history, the Kennedy family, World War II and seat-of-the-pants excitement will devour this book, a must-read story that stands out from the pack. It’ll make you want to turn back to your history books once again.”—BookPage

“Francine Mathews delivers a marvel: a thriller with genuine heart. This is a delicious imagining of one of the 20th century’s most fascinating figures, wrapped up in a gripping story of espionage.” – Eleanor Brown, bestselling author of the The Weird Sisters

“Like JFK himself, this book is smart, sexy and unafraid of taking risks. With nimble prose and easy charm, Francine Mathews leads us beyond the frontiers of history to make us believe in her vision of a young Kennedy at large in a dark world of prewar spies and secrets.” – Dan Fesperman, author of Lie in the Dark

“A brilliantly conceived, riveting tightrope race across Europe in the predawn of World War II." – Stephen White, author of Line of Fire and The Last Lie

“A triumph: an exciting thriller, an intriguing exploration of a troubled time, and an absorbing take on the early history of one of America’s most iconic figures. Highly recommended.” – Iain Pears, bestselling author of An Instance of the Fingerpost