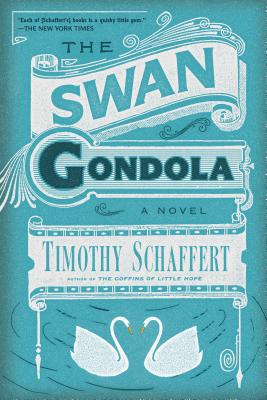 Timothy Schaffert's The
Swan Gondola is an immersive, picturesque novel recounting the
recent history of one “Ferrett” Skerritt – an orphan who came
of age on the dusty streets of 1898 Omaha, Nebraska, first as an
accomplished pick-pocket, then as a ventriloquist working with a
sophisticated mechanical dummy named Oscar. Ferrett has mysteriously
crashed a hot air balloon into the rural farm of two elderly
spinsters, and as they tend to his injuries and hear his tale, they
present him with mysteries of their own. The crash of the hot air
balloon is the culmination of a poignant love story, set agains the
magnificent scenery of the Omaha World's Fair. With wonderful
allusions to The Wizard of Oz – a wicked witch, a man-made
cyclone, and Emerald Castle, and a girl named Dorothy in addition to
the hot-air ballon – as well as a remarkable cast of quirky
characters, the story is sweet and haunting and enchanting." ~Heather

— Heather is an enthusiastic reader and works as our Director of Marketing at Tattered Cover
A lush and thrilling romantic fable about two lovers set against the scandalous burlesques, midnight seances, and aerial ballets of the 1898 Omaha World's Fair.
On the eve of the 1898 Omaha World's Fair, Ferret Skerritt, ventriloquist by trade, con man by birth, isn t quite sure how it will change him or his city. Omaha still has the marks of a filthy Wild West town, even as it attempts to achieve the grandeur and respectability of nearby Chicago. But when he crosses paths with the beautiful and enigmatic Cecily, his whole purpose shifts and the fair becomes the backdrop to their love affair.
One of a traveling troupe of actors that has descended on the city, Cecily works in the Midway's Chamber of Horrors, where she loses her head hourly on a guillotine playing Marie Antoinette. And after closing, she rushes off, clinging protectively to a mysterious carpetbag, never giving Ferret a second glance. But a moonlit ride on the swan gondola, a boat on the lagoon of the New White City, changes everything, and the fair's magic begins to take its effect.
From the critically acclaimed author of "The Coffins of Little Hope," "The Swan Gondola "is a transporting read, reminiscent of "Water for Elephants "or "The Night Circus.
Timothy Schaffert grew up on a farm in Nebraska and now lives in Omaha. He is the author of four previous critically acclaimed novels, which have been among Barnes & Noble Discover Great New Writers selections, Indie Next Picks, and New York Times Editor s Choices. Schaffert teaches creative writing and literature at the University of Nebraska Lincoln."