The Israel Test: Why the World's Most Besieged State Is a Beacon of Freedom and Hope for the World Economy (Paperback) 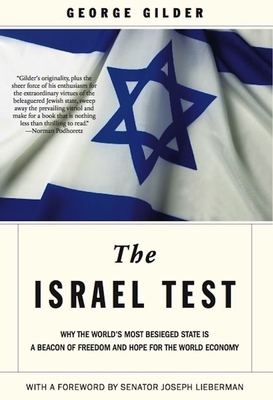 The Israel Test: Why the World's Most Besieged State Is a Beacon of Freedom and Hope for the World Economy (Paperback)


Available to Order - Usually Arrives in Our Store in 4 to 7 Days
In this book, George Gilder asserts that widespread antagonism toward the current state of Israel springs from, like anti-Semitism everywhere, envy of superior accomplishment. Israel's sudden rise as a world capitalist and technological power, he argues, stems in part from the Jewish culture of mind and in part from Judaism itself, which, "perhaps more than any other religion, favors capitalist activity and provides a rigorous moral framework for it." Critics of Israel--in the U.S., in the surrounding countries of the Middle East and in Western European nations that are facing socialist decline--have failed the "Israel Test" because they seek to tear down this country's success rather than emulate it. America's ability and desire to defend Israel will define our future survival as a nation: "If Israel is destroyed," he says, "capitalist Europe will likely die as well, and America, as the epitome of productive and creative capitalism spurred by Jews, will be in jeopardy.
George Gilder's bestselling books have sold more than two million copies worldwide. In Wealth and Poverty, one of the most influential books of our time, Gilder made the moral case for capitalist creativity. With The Spirit of Enterprise, Microcosm, Telecosm, and Life After Television, Gilder achieved renown as a stunningly accurate prophet of the direction of technology development and enterprise, including Israel's world-beating contributions. A contributing editor to Forbes magazine, Gilder has produced the annual Gilder/Forbes Telecosm Forum since 1997, offering leading edge forecasts and analysis from the top technology firms and research centers around the world. Gilder also heads Gilder Technology Associates, a venture capital fund focusing on breakthrough technologies. In 1986 President Ronald Reagan presented Gilder the White House Award for Entrepreneurial Excellence. Gilder is a founding fellow of the Discovery Institute in Seattle, a contributing editor to Forbes, and writes frequently for national publications including The Wall Street Journal, Wired, National Review, and The American Spectator.