Walls: Travels Along the Barricades (Paperback) 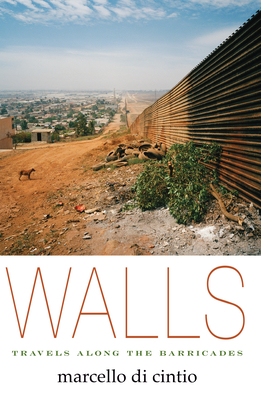 Walls: Travels Along the Barricades (Paperback)


Email or call for price. Handling fee may apply.
What does it mean to live against a wall? Travel to the world’s most disputed edges to meet the people who live alongside the razor wire, concrete, and steel and how the structure of the walls has influenced their lives.

In this ambitious first person narrative, Marcello Di Cintio shares tea with Saharan refugees on the wrong side of Morocco’s desert wall. He meets with illegal Punjabi migrants who have circumvented the fencing around the Spanish enclave of Ceuta. He visits fenced-in villages in northeast India, walks Arizona’s migrant trails, and travels to Palestinian villages to witness the protests against Israel’s security barrier.

From Native American reservations on the U.S.-Mexico border and the “Great Wall of Montreal” to Cyprus’s divided capital and the Peace Lines of Belfast, Di Cintio seeks to understand what these structures say about those who build them and how they influence the cultures that they pen in. He learns that while every wall fails to accomplish what it was erected to achieve – the walls are never solutions – each wall succeeds at something else. Some walls define Us from Them with Medieval clarity. Some walls encourage fear or feed hate. Some walls steal. Others kill. And every wall inspires its own subversion, either by the infiltrators who dare to go over, under, or around them, or by the artists who transform them.
Marcello Di Cintio is the author of four books including Walls: Travels Along the Barricades which won the Shaughnessy Cohen Prize for Political Writing and the City of Calgary W.O. Mitchell Book Prize. Di Cintio's magazine writing can be found in publications such as The Walrus, Canadian Geographic, The International New York Times, and Afar. His book, Pay No Heed to the Rockets: Palestine in the Present Tense, examines life in contemporary Palestine as seen through the lens of literary culture. Di Cintio is a former writer-in-residence with the Calgary Distinguished Writers Program and the Palestine Writing Workshop, and a featured instructor at the Iceland Writers Retreat. He lives in Calgary, Canada.
Winner of the 2013 City of Calgary W. O. Mitchell Book Prize
Winner of the 2013 Wilfred Eggleston Prize for Nonfiction
Nominated for the 2013 British Columbia National Award for Nonfiction
Nominated for the 2013 Charles Taylor Prize for Literary Nonfiction
Nominated for the 2013 Alberta Readers' Choice Award
Named to The Globe and the Mail's List of the Top 100 Books of 2012