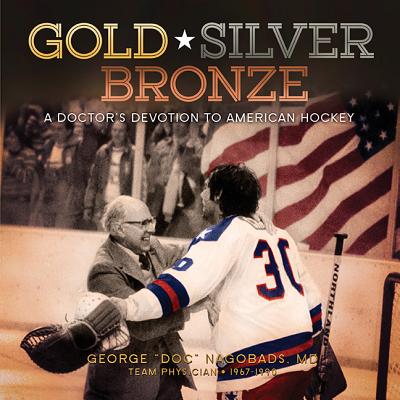 By George Nagobads
Please email or write store for pricing and availability information.
Out of Print

Gold, Bronze, & Silver: A Doctor's Devotion to American Hockey offers an inside view of the hockey players and teams that rep resented the United States in international competition from 1967 to 1990 as they traveled around the globe and behind the Iron Curtain. George "Doc" Nagobads served as team physician, multilingual problem solver, travel guide, and surrogate father to the young men traveling the world in pursuit of glory and gold. Fluent in four languages, Doc was the perfect person to handle challenges with passports, border crossings, KGB agents, and the youthful exuberance of young men looking to have a good time in sometimes-unfriendly environments.

Doc's journal and camera were always with him as he traveled with over thirty teams, including the gold medal-winning 1980 US Olympic hockey team. This book includes the story of Doc's stopwatch, a key ingredient to beating the mighty Soviet team and performing a miracle on ice.

Over one hundred and thirty photos complement.