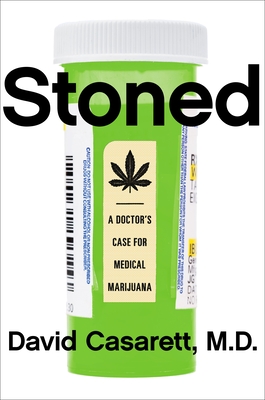 No substance on earth is as hotly debated as marijuana. Opponents claim it’s dangerous, addictive, carcinogenic, and a gateway to serious drug abuse. Fans claim it as a wonder drug, treating cancer, anorexia, AIDS, chronic pain, glaucoma, arthritis, migraines, PTSD, and insomnia. Patients suffering from these conditions need—and deserve—hard facts based on medical evidence, not hysteria and superstition.

In Stoned, palliative care physician Dr. David Casarett sets out to do anything—including experimenting on himself—to find evidence of marijuana’s medical potential. He smears mysterious marijuana paste on his legs and samples pot wine. He poses as a patient at a seedy California clinic and takes lessons from an artisanal hash maker. In conversations with researchers, doctors, and patients around the world he learns how marijuana works—and doesn’t—in the real world.

Dr. Casarett unearths tales of near-miraculous success, such as a child with chronic seizures who finally found relief in cannabidiol oil. In Tel Aviv, he learns of a nursing home that’s found success giving marijuana to dementia patients. On the other hand, one patient who believed marijuana cured her lung cancer has clearly been misled. As Casarett sifts the myth and misinformation from the scientific evidence, he explains, among other things:

Often humorous, occasionally heartbreaking, and full of counterintuitive conclusions, Stoned offers a compassionate and much-needed medical practitioner’s perspective on the potential of this misunderstood plant.
DAVID CASARETT, M.D., the author of Shocked, is a physician, researcher, and tenured professor at the University of Pennsylvania’s Perelman School of Medicine. His studies have resulted in more than one hundred articles and book chapters, published in leading medical journals such as JAMA and The New England Journal of Medicine. His many awards include the prestigious U.S. Presidential Early Career Award for Scientists and Engineers. He lives in Philadelphia.
“A thoroughly researched analysis, Stoned brings welcome objectivity to an important but contentious topic. Casarett applies a unique mix of science, humanity, and even humor to effectively dispel common myths and misconceptions about medical marijuana. Stoned will be a valuable resource for patients, health-care providers, and policy makers.”
—Nadine Strossen, former president, American Civil Liberties Union

“This well-researched and delightfully told chronicle humanizes the medical marijuana movement in a way that should move even the most skeptical reader. A master of clever analogy, Dr. Casarett now joins Dr. Sanjay Gupta as a prominent physician helping to mainstream medical marijuana so that someday even more may benefit from its therapeutic effects.”
—Donald I. Abrams, M.D., chief, hematology-oncology, San Francisco General Hospital; professor of clinical medicine, University of California San Francisco

“A highly readable weaving of anecdote and evidence that confirms that marijuana is a medicine, a medicine that needs honest, unfettered research to properly exploit its benefits. Give a copy to a doubter.”
—Clint Werner, author of Marijuana Gateway to Health

“A dramatic and accessible tale that combines interactions with front-line researchers and compelling patients to give readers an intriguing look at how to reason about this controversial plant.”
—Mitch Earleywine, Ph.D., board chair, National Organization for the Reform of Marijuana Laws (NORML)