Counsel in the Crease: A Big League Player in the Hockey Wars (Hardcover) 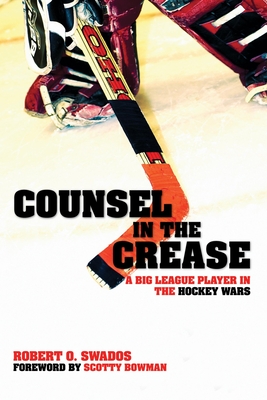 By Robert Swados, Scotty Bowman (Foreword by)
Email or call for price. Handling fee may apply.
Hard to Find

In his diverse, exciting, and very active forty-five-year legal career, spent mainly in the world of professional sports, attorney Robert O. Swados has worn many hats--owner, league executive, counsel, and franchise builder. In this wide-ranging and good-humored memoir, Swados offers many behind-the-scenes insights into the players, coaches, executives, and owners who have created today's sports entertainment industry.
Swados describes his early involvement in professional sports through his efforts in the 1960s to bring a Major League Baseball franchise to his hometown of Buffalo, NY. The deal was so close that a New York Daily News headline erroneously announced that new franchises would go to San Diego and Buffalo.
But things really got interesting when in 1969 Swados helped Seymour Knox III and Northrup Knox to establish the Buffalo Sabres. Thus began an exciting thirty-year journey through the ups and downs of the National Hockey League. As part owner, vice chairman, and counsel of the Sabres, Swados has had many opportunities to "score from the crease," and sometimes the action behind the scenes is just as rough and tumble as that on the ice. He tells many fascinating tales about his dealings with winning coaches including Scotty Bowman, with General Managers Punch Imlach and John Muckler, with owner John McMullen, and with commissioners John Ziegler and Gary Bettman, among others. He also talks frankly about the impact of Adelphia's bankruptcy on the fate of the Sabres and about the obsessions and frustrations of the 2004 NHL lockout. Perhaps no one in professional sports has had such an engaging and productive view.
For hockey fans in the U.S. and Canada, especially Buffalo Sabres fans, and anyone interested in the business of bigtime sports, Robert Swados's entertaining and informative story is a must-read.

Robert O. Swados is presently of counsel for Phillips Lytle LLP, a leading Buffalo law firm, and an officer for the Buffalo Sabres Hall of Fame and Foundation. He has been a member of the Hall of Fame since 1995 and chairman of its selection committee since 2001.

"A lively set of insights on the sports world as a whole makes Counsel in the Crease a highly recommended pick indeed."
- Internet Bookwatch
"Swados’s Buffalo love seeps from every page…The book covers everything a Sabres fan could desire…It’s all here…Written with wit, warmth, and an often surprising level of honesty, the book is a success for hockey freaks and even those with just moderate interest in the game…for a long-time Sabres fan, Counsel in the Crease is damn near un-missable, offering some of the juiciest views of the franchise’s backroom dealings a fan will ever see."
- Buffalo Spree
"...an in-depth, detailed look at the Sabres' franchise through the eyes and ears of Swados....pro-Buffalo, pro-Sabres, pro-Knox group, a man who spills his blue and gold blood all over these pages. He takes the reader into the board rooms, into the locker rooms, into negotiations, everywhere but in the faceoff circles and the corners of the rink...This is the definitive history - or at least one version - of the first 35 years of the Sabres' franchise, told as oral history, by a man who was there. Many of the principals from the first 30 years of the franchise have taken these conversations and negotiations to their graves; Bob Swados has made sure the history will survive...this is a fascinating read for those who want to hear one man's version of what happened in the board rooms and behind the scenes." ."
- The Buffalo News

"[Swados] uses an obsession with detail in a sophisticated way to reveal the complexity behind his subject....fans of [the Buffalo Sabres] will thoroughly enjoy Swados's insider views of the Sabres and its various owners. General hockey fans will be enlightened by Swados's insights into the sport's various financial and legal imbroglios."
- Publishers Weekly