Principles of Flight: Flying Bush Planes Through a World of War, Sexism, and Meat (Paperback) 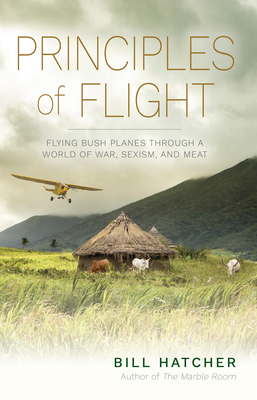 After narrowly surviving a plane crash, Bill Hatcher wakes up to discover his life of carefree abandon shattered. As a Peace Corps volunteer in Tanzania in the 1990s, he had risen above his own racial prejudices and religious jingoism, and yet had remained emotionally aloft, afraid to commit to the full transformation that was calling to him. In spite of misgivings, he returns to Africa. In Kenya, he flies bush planes, guides wilderness courses, and falls in love with a young Kikuyu woman. All seems well until Bill is attacked and beaten by thugs and then injured when he's chased by an elephant. Still unable to deal with reality, he escapes to Alaska, where he flies still higher and loves even more recklessly. Ultimately, the principles of flight force him to make a choice: to fly away again or finally return to Earth as an advocate for social, animal, and environmental justice. Set before, during, and after 9/11 and the wars that followed, and filled with spectacular scenes of flights over the African savanna and Alaskan glaciers, Principles of Flight is a memoir of grand adventure as well as a psychosocial inquiry into the hyper-masculinism that has dominated the world.