The Pathology of Normalcy (Paperback) 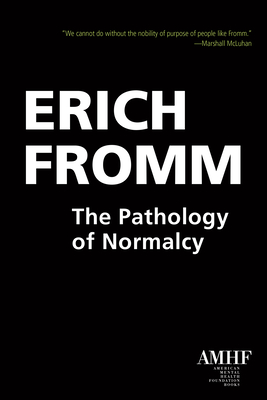 The Pathology of Normalcy (Paperback)


Available to Order - Usually Arrives in Our Store in 4 to 7 Days
"The Pathology of Normalcy examines the very definitions of mental health and mental sickness in modern-day society. Sections consist of lectures about frame of reference when evaluating mental health, the intersection of alienation and mental health issues, and even the interplay between psychological and economic theory, as he deconstructs the weaknesses of Marxist Socialism and explains why it has been largely rejected in modern America. Of particular interest is the self-evident section "Is Man Lazy by Nature?," which strives to understand how humankind can best overcome its own tendencies toward inertia. [The American Mental Health Foundation's Fromm titles] are timely, directly relevant to modern psychological and social issues, and bring absolutely invaluable humanist messages to temper psychology's scientific and healing discipline. Highly recommended, especially for college library collections." —Midwest Book Review A brilliant meditation on mental health in the modern world; alienation and mental health; ways to overcome “the insane society”; a comprehensive analysis of prevailing concepts of mental health against Fromm’s views on overcoming destructive narcissism and social determinants of mental health; and a look at humankind’s alleged passivity in relation to dreams, child development, and psychology.
Erich Fromm (1900-1980) was a German social psychologist, psychoanalyst, humanistic philosopher, and democratic socialist. He was associated with what became known as the Frankfurt School of critical theory. His best known work, Escape from Freedom (1941), focuses on the human urge to seek a source of authority and control upon reaching a freedom that was thought to be an individual’s true desire. Fromm’s critique of the modern political order and capitalist system led him to seek insights from medieval feudalism. His many works (in English) include Psychoanalysis and Religion (1950); The Art of Lovingz (1956); and On Being Human (1997).