The Mirror of Yoga: Awakening the Intelligence of Body and Mind (Hardcover) 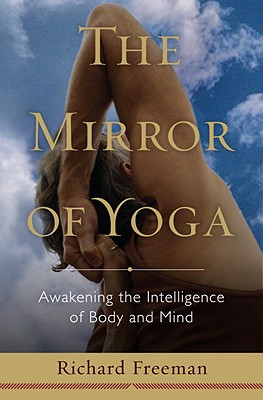 The Mirror of Yoga: Awakening the Intelligence of Body and Mind (Hardcover)

The world of yoga is astonishingly rich in its array of schools and practices. Yet, as diverse as they seem, they share a common aim: the discovery of the essence of existence that can be found at the core of our being, and the liberation that comes from that discovery. With this worthy goal in mind, Richard Freeman presents an enlightening overview of the many teachings, practices, and scriptures that serve as the basis for all the schools of yoga—hatha, bhakti, jnana, karma, tantra, and others. He shows how the myriad forms are ultimately related, and can even be perceived to make up a vast, interpenetrating matrix, symbolizing the unity, profundity, and beauty of the ancient tradition.

Richard's wide-ranging discussion includes the Upanisads and Samkhya philosophies, the Yoga Sutra of Patanjali, the eight limbs of astanga yoga, the process and purpose of hatha yoga, and much more. He also explores the role of the guru, chanting, meditation, and the yogic imperative of offering service to others. All of this is applied to the actual practice, giving the reader the tools to digest and apply the wealth of information to daily life. The Mirror of Yoga will be a welcome resource to all yogis who wish to better practice the profound philosophy underlying their practice.

To learn more, visit <a target="_blank" href="http://mirrorofyoga.com/">MirrorofYoga.com</a>.
Richard Freeman has been a student of yoga since 1968. His background includes studying Ashtanga, Iyengar, bhakti, and traditional hatha yoga; Western and Eastern philosophy; and Sanskrit; all of which he incorporates into the Ashtanga yoga practice as taught by his principal teacher, K. Pattabhi Jois of Mysore, India. Richard teaches at his studio, the Yoga Workshop, in Boulder, Colorado, as well as at studios and conferences throughout the world. He also has a video series, Yoga with Richard Freeman, which has inspired many people to take up yoga. He is also a frequent contributor to Yoga Journal.
“Because of Richard Freeman’s sterling reputation, I often confront tough situations with this question: ‘What would Richard Freeman do?’ His new book affirms that my faith is well-placed.  Freeman's tone and insight open us.  Quietly, he finds whole worlds within yoga's simple acts.”—Eric Shaw, Yoga Journal

“Collectively, these essays form an insightful and oftentimes humorous introduction to the deeper aspects of yoga philosophy, suitable for both the neophyte and the seasoned practitioner. In addition to being quite original, imaginative, and at times almost whimsical, The Mirror of Yoga is also firmly grounded in references to, and excerpts from, those yogic texts most respected by all schools of practice.”—Namarupa Magazine Online

“A delightful read on the aspects of yoga philosophy will provide the beginner and the advanced yogi with a much deeper insight in the wonderful world of yoga.”—Organic Spa magazine


“This thoughtful and beautifully written book . . . will take the average yogi to the next level.”—New Age Retailer