The Druid Plant Oracle: Working with the Magical Flora of the Druid Tradition (Kit) 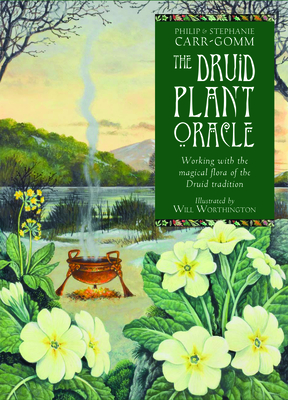 The Druid Plant Oracle: Working with the Magical Flora of the Druid Tradition (Kit)


Available to Order - Usually Arrives in Our Store in 4 to 7 Days
Bring ancient Druid plant and herb lore into your life.

The Druids revered certain plants—trees, herbs and fungi—and attached special meanings to them. This stunning deck of 36 cards presents many of the most significant plants and describes their associated folklore and mythology.

Will Worthington’s rich images depict each plant in its natural habitat in exquisite detail, while Philip and Stephanie Carr-Gomm’s enlightening text reveals the virtues and qualities of each species and shows how the cards can be used as an oracle from which you can gain wisdom, guidance, and inspiration.
Philip Carr-Gomm was trained by the Chief Druid Ross Nichols. He is Chief of the Order of Bards, Ovates and Druids and the author of many titles, including The Druid Way and Druid Mysteries.

Stephanie Carr-Gomm helps administer the training program for the Order of Bards, Ovates and Druids. She is coauthor with Philip of The Druid Animal Oracle and The Druid Craft Tarot.

Will Worthington has worked as an illustrator for the past 30 years. He has contributed illustrative work to many titles, including The Book of Druidry and The Druid Animal Oracle.