77: Denver, The Broncos, and a Coming of Age (Hardcover) 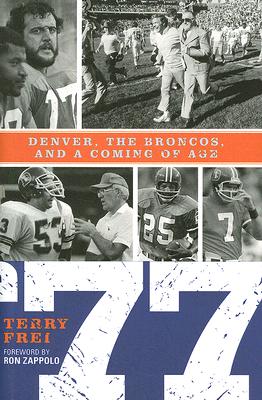 77: Denver, The Broncos, and a Coming of Age (Hardcover)


Available to Order - Usually Arrives in Our Store in 4 to 7 Days
Asserting that the 1977 AFC champion Denver Broncos were the tipping point for the transformation of Denver, Colorado from an outpost city with an inferiority complex to today's sports and entertainment mecca, award-winning author Terry Frei provides an intimate look at both a professional sports team and the city it brought together at a time of great change. Frei offers profiles of catalyst coach Red Miller and such legendary players as Randy Gradishar, Craig Morton, Louis Wright, Billy Thompson, Tom Jackson, and Lyle Alzado, but doesn't stop there, making readers feel as if they intimately know virtually everyone on the roster as the often ground-breaking narrative of that season continues. Frei describes Denver's evolving politics that year-when Richard Lamm was a young and controversial governor and Bill McNichols was one of the last machine-style mayors-plus the metro-area culture in the late 1970s as the Broncos go from victory to victory on their way to their first Super Bowl. As '77 wide receiver Haven Moses, part of the famed M&M Connection, put it, "Denver should have gotten the Nobel Peace Prize that year. There was more done that year to bring people together than I've ever seen in my life . . . And this brought attention to what Denver was about to become.
Terry Frei writes for the Denver Post and ESPN.com. His previous books include Horns, Hogs, and Nixon Coming and Third Down and a War to Go: The All-American 1942 Wisconsin Badgers. He lives in Denver, CO.