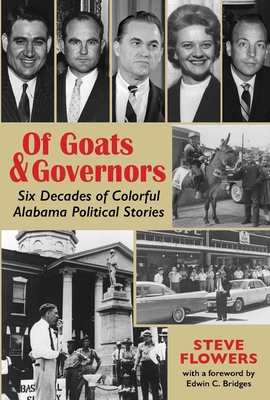 Few states have as colorful a political history as Alabama, especially in the post-World War II era. During the past six decades, the state played a central role in the civil rights movement, largely moved away from its earlier farm-based economy and culture, and transitioned from a relatively moderate-progressive Democratic Party politics to today's hard-core conservative Republican Party domination.

Moving onto and off Alabama's electoral stage during all these transformations have been some of the most interesting figures in 20th-century American government and politics. Swirling around these elected officials in the Heart of Dixie are stories, legends, and jokes that are told and retold by political insiders, journalists, and scholars who follow the goings-on in Washington and Montgomery. In Alabama, it seems, politics is not only a blood sport but high entertainment. There could be no better guide to this colorful history than political columnist and commentator Steve Flowers.
Troy native STEVE FLOWERS was a page in the Alabama Legislature at age 12 and worked at the Capitol throughout high school. At the University of Alabama, he served in the Student Senate and graduated in 1974 with a degree in political science and history. At age 30, he was elected State Representative from Pike County. He was reelected four times and retired in 1998 with a perfect attendance record for 16 consecutive years. His House colleagues honored him as outstanding freshman member in 1982, most ethical member in 1988, and most outstanding member in 1992. In 2002, Flowers began writing on Alabama politics. Today his weekly column appears in more than 60 newspapers. In addition, his weekly radio show on Alabama politics is heard statewide on Alabama Public Radio, and he is the political analyst for the University of Alabama Radio and TV Network. Flowers has also analyzed Alabama politics for state, national, and international television audiences on CBS, PBS, ABC, and the British Broadcasting Network. Flowers has been an up-close participant and observer of the Alabama political scene for more than 50 years and is widely considered the ultimate authority today on Alabama politics and Alabama political history.