Storming the State House: The Campaign That Liberated Alabama from 136 Years of Democrat Rule (Paperback) 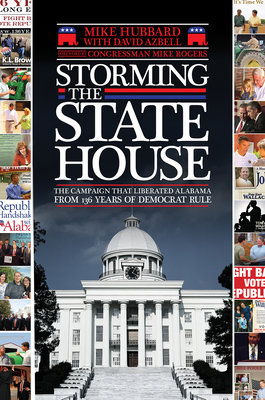 Storming the State House: The Campaign That Liberated Alabama from 136 Years of Democrat Rule (Paperback)

By Mike Hubbard, David Azbell (With), Mike Rogers (Foreword by)


Available to Order - Usually Arrives in Our Store in 4 to 7 Days
Storming the State House provides a revealing, behind-the-scenes look into the campaign that elected Alabama's first Republican legislature in modern history and liberated the state from 136 years of Democratic Party rule. Written by Speaker of the House Mike Hubbard, it is a battlefield account by the architect of the Republican takeover, whose vision and partisan vigor directly led to the GOP tsunami that hit Alabama in November 2010.
Mike Hubbard (Author) In the historic 2010 election, MIKE HUBBARD became the first Republican Speaker of the House since Reconstruction. He is a businessman and state legislator from Auburn, Alabama; he worked for the Auburn University athletic department's media relations office and, in 1994, formed his own multi-media and marketing company, Auburn Network, Inc. Hubbard served as House minority leader 2005-10 and completed two terms as chairman of the Alabama Republican Party. Hubbard's wife, Dr. Susan Hubbard, is a professor and associate dean in Auburn University's College of Human Sciences. They have two sons, Clayte and Riley. The Hubbards are active members of the Auburn United Methodist Church. David Azbell (With) David Azbell, a Republican political and public relations consultant, has served as spokesman for Alabama governors George C. Wallace, Fob James, and Bob Riley, and was Deputy Secretary of State under Jim Bennett. Since 2005, he has worked closely with the Alabama House Republican Caucus as its principal communications advisor. He and his wife, Michelle, live in Montgomery.