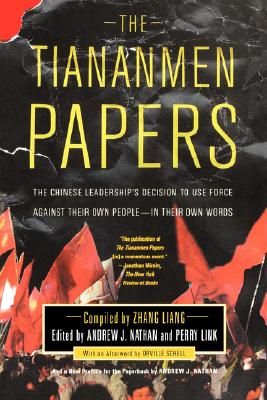 
Available to Order - Usually Arrives in Our Store in 4 to 7 Days
On the night of June 3-4, 1989, Chinese troops violently crushed the largest pro-democracy demonstrations in the history of the communist regime. In this extraordinary collection of hundreds of internal government and Communist Party documents, secretly smuggled out of China, we learn how these events came to pass from behind the scenes. The material reveals how the most important decisions were made; and how the turmoil split the ruling elite into radically opposed factions. The book includes the minutes of the crucial meetings at which the Elders decided to cashier the pro-reform Party secretary Zhao Ziyang and to replace him with Jiang Zemin, to declare martial law, and finally to send the troops to drive the students from the Square.

Just as the Pentagon Papers laid bare the secret American decision making behind the Vietnam War and changed forever our view of the nation's political leaders, so too has The Tiananmen Papers altered our perception of how and why the events of June 4 took the shape they did. Its publication has proven to be a landmark event in Chinese and world history.
Andrew J. Nathan is professor of politics at Columbia University and the author of numerous books, including China's Transition (Columbia). He is a frequent contributor to the New Republic.

Perry Link is professor of Chinese language and literature at Princeton University. In 1988-89 he served as Beijing director of a subcommittee of the National Academy of Sciences. He is the author of many books, including Evening Chats in Beijing: Probing China's Predicament (Norton).

Orville Schell, dean of graduate studies in journalism at the University of California, Berkeley, is considered one of America's foremost experts on China. His most recent book on contemporary China is The China Reader: the Reform Era (Vintage).