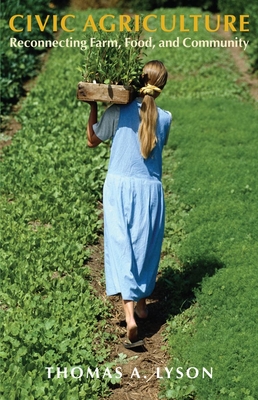 By Thomas A. Lyson
Please email or write store for pricing and availability information.
Warehouse Out of Stock

While the American agricultural and food systems follow a decades-old path of industrialization and globalization, a counter trend has appeared toward localizing some agricultural and food production. Thomas A. Lyson, a scholar-practitioner in the field of community-based food systems, calls this rebirth of locally based agriculture and food production civic agriculture because these activities are tightly linked to a community’s social and economic development. Civic agriculture embraces innovative ways to produce, process, and distribute food, and it represents a sustainable alternative to the socially, economically, and environmentally destructive practices associated with conventional large-scale agriculture. Farmers’ markets, community gardens, and community-supported agriculture are all forms of civic agriculture. Lyson describes how, in the course of a hundred years, a small-scale, diversified system of farming became an industrialized system of production and also how this industrialized system has gone global. He argues that farming in the United States was modernized by employing the same techniques and strategies that transformed the manufacturing sector from a system of craft production to one of mass production. Viewing agriculture as just another industrial sector led to transformations in both the production and the processing of food. As small farmers and food processors were forced to expand, merge with larger operations, or go out of business, they became increasingly disconnected from the surrounding communities. Lyson enumerates the shortcomings of the current agriculture and food systems as they relate to social, economic, and environmental sustainability. He then introduces the concept of community problem solving and offers empirical evidence and concrete examples to show that a re-localization of the food production system is underway.

THOMAS A. LYSON (d. 2007) was Liberty Hyde Bailey Professor, Department of Development Sociology, Cornell University. His most recent book, co-edited with Richard K. Olsen, was Under the Blade: The Conversion of Agricultural Landscapes (1998). A past editor of the journal Rural Sociology, Lyson was an Associate Editor of the Journal of Sustainable Agriculture.