Back in the Days (Hardcover) 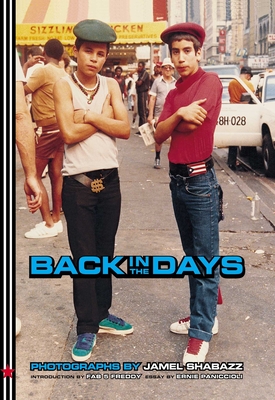 Back in the Days (Hardcover)


Available to Order - Usually Arrives in Our Store in 4 to 7 Days
Back in the Days documents the emerging Hip Hop scene from 1980-1989-before it became what is today's multi-million-dollar multinational industry. Back in the days, gangs would battle not with guns, but by breakdancing. Back in the days, the streets-not corporate planning-set the standards for style. Back in the days, Jamel Shabazz was on the scene, photographing everyday people hangin' in Harlem, kickin' it in Queens, and cold chillin' in Brooklyn.

Street styling with an attitude not seen in fashion for another twenty years to come, Shabazz's subjects strike poses that put supermodels to shame-showing off Kangol caps and Gazelle glasses, shell-top Adidas and suede Pumas with fat laces, shearling coats and leather jackets, gold rope chains, door-knocker earrings, name belts, boom boxes, and other designer finery. For anyone who wants to know what "keepin' it real" means, Back in the Days is the book of your dreams.
Jamel Shabazz is best known for his iconic photographs of New York City during the 1980s. He has authored ten monographs and contributed to over three dozen other photography related books. His photographs have been exhibited worldwide and his work is housed within the permanent collections of the Whitney Museum, the Studio Museum in Harlem, the Smithsonian's National Museum of African American History and Culture, the Fashion Instutite of Technology, the Gordon Parks Foundation and the Getty Museum. Over the years, Shabazz has instructed young students at the Studio Museum in Harlem's "Expanding the Walls" project, the Schomburg Center for Research in Black Culture's "Teen Curators" program, and the Rush Philanthropic Arts Foundation. He is also the 2018 recipient of the Gordon Parks award for his commitment to documentary photography. Shabazz is a member of the photo collective Kamoinge. As an artist his goal is to contribute to the preservation of world history and culture.