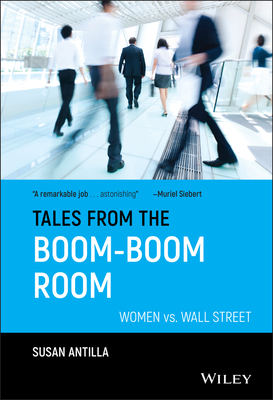 
Available to Order - Usually Arrives in Our Store in 4 to 7 Days
In the 1990s, women in record numbers looked to Wall Street as a great place to build successful and lucrative careers. What many of them found there was no meritocracy, but an industry living by the rules of a 1960s fraternity, with the money and legal clout to silence any challenges. Award-winning columnist Susan Antilla broke the story of shocking sex discrimination at Smith Barney and other major brokers. Her disclosures in the press were a rallying cry for class actions challenging the sexual hazing and outrageous disparities in pay that shackled professional women on Wall Street.

Taking its title from the infamous basement party room of Smith Barney's Garden City, New York, branch office, and representing years of extensive research, Tales from the Boom-Boom Room traces the story of the lead whistle-blower, Pam Martens, the crusading broker who put an entire industry on the defensive, then found herself at odds not just with her local bosses and with powerful figures like Travelers Group president Jamie Dimon, but with her coplaintiffs and attorneys. The women's employment agreements forbade them to sue, and only an ingenious legal strategy circumvented that virtual gag rule and brought the scandal out from behind the closed doors of arbitration. This is a riveting human, legal, and business drama of women and men in the financial institutions on Wall Street and around America.
SUSAN ANTILLA is a columnist for Bloomberg News. At the New York Times, she launched the weekly "Investing" column in the Saturday edition and the "Between Main & Wall" ombudsman column. Her articles and columns have appeared in People, USA Today, the Baltimore Sun, Town & Country, Working Woman, Savvy, and Mirabella. She was twice selected as a finalist for the Gerald Loeb Award for Distinguished Business and Financial Journalism and was among the top investigative reporters named to TJFR's "1999 Blue Chip Newsroom." A frequent lecturerand panelist, she holds a master's degree in journalism from New York University, where she has taught as an adjunct professor in the Graduate School of Journalism.