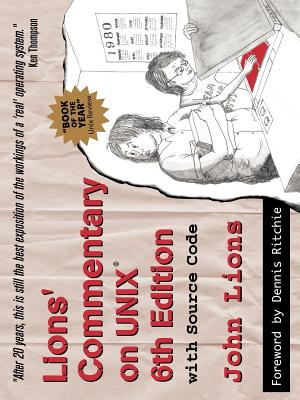 By John Lions, Peter H. Salus (Editor)
Email or call for price. Handling fee may apply.
Available to Order - Usually Arrives in Our Store in 4 to 7 Days

The most famous suppressed book in computer history * Used as an Operating System textbook at MIT"After 20 years, this is still the best expostion of the workings of a 'real' operating system." --- Ken Thompson (Developer of the UNIX operating system)After years of suppression (as trade secrets) by various owners of the UNIX code, this tome has been re-released, and we owe a debt to all involved in making this happen. I consider this to be the single most important book of 1996. Unix Review, June 1997"The Lions book", cherished by UNIX hackers and widely circulated as a photocopied bootleg document since the late 1970's, is again available in an unrestricted edition. This legendary underground classic, reproduced without modification, is really two works in one: the complete source code to an early version (Edition 6) of the UNIX operating system, a treasure in itself a brilliant commentary on that code by John Lionswith additional historical perspective essays added in 1996.Lions' marriage of source code with commentary was originally used as an operating systems textbook, a purpose for which it remains superbly well-suited (as evidenced by it's ongoing use at MIT).