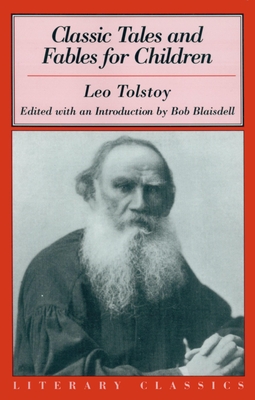 
Available to Order - Usually Arrives in Our Store in 4 to 7 Days
Renowned Russian novelist Leo Tolstoy had an abiding interest in children and in children's literature. At the age of twenty-one, he started a school for peasant children on his family's estate, and after returning from a stint in the military, he founded another, experimental school with the motto, "Come when you like, leave when you like."

Fascinated by the simple charm and the fresh innocence with which the children of his schools told stories, several years later, when Tolstoy began writing about his own childhood, he emulated the uncomplicated narrative style and disarming directness of the tales told by the children of his acquaintance. After completing War and Peace, he incorporated these stories in a series of easy readers, and continued to work on them even while writing Anna Karenina. Known as The ABC Book (Azbuka) and subsequently The New ABC Book (Novy Azbuka), these marvelous readers were widely adopted in Russia and were still in use in the Soviet era.

The tales and fables in this volume come mainly from these two well-loved primers. Part I consists of stories about his own childhood, all told with beautiful simplicity. Part II contains Tolstoy's free adaptations of fables from Aesop and from Hindu tradition. Part III is devoted solely to his longest and most famous children's work, the fairy tale "Ivan the Fool and His Two Brothers."

Never patronizing and often humorous, these small gems reveal Tolstoy's deep appreciation for and understanding of children's artistic and moral sensibilities.
Translated by Leo Weiner and Nathan Dole edited with an introduction by Bob Blaisdell Bob Blaisdell (New York, NY) teaches at Kingsborough Community College, City University of New York, and is the editor of many anthologies, including Tolstoy as Teacher: Leo Tolstoy's Writings on Education.