Still Horse Crazy After All These Years: If It Didn't Happen This Way, It Should Have (Paperback) 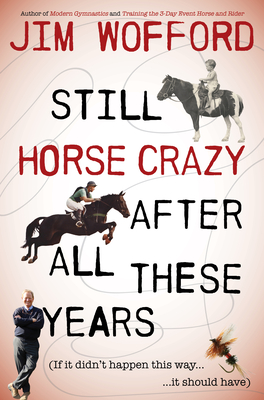 Still Horse Crazy After All These Years: If It Didn't Happen This Way, It Should Have (Paperback)

A rare insider's look at the life of a professional sportsman as he tries to reconcile the passion that drives him with livelihood, family, and aging.

Known for his wit, irreverence, and whip-smart observations on equestrian sport and its participants, three-time Olympian Jim Wofford's writing is as legendary as his performances in the saddle. Now he again brings his immense talent for telling tales--all of them (mostly) true--to the page in his autobiography.

Growing up on a Kansas farm that shared a border with Fort Riley, home to the U.S. Cavalry School from 1887 to 1949, and the son of a sporting Army-man who rode in uniform in the 1932 Olympics, Wofford shares his wholly unique perspective on horsemanship and the history of equestrian competition in the United States. We track his ascendancy from one-room schoolhouse, to Culver Military Academy, to the United States Equestrian Team headquarters in Gladstone, New Jersey, during its heyday. Along the way, Wofford introduces some of history's great horses and the people who loved them as he strives to reach the top of the international eventing scene. Fascinating stories from his many adventures around the world contribute to this honest, funny, poignant read certain to entertain and educate every horse person.

James Wofford is a three-time Olympian and one of the best-known eventing trainers in the world today. In 2000, Wofford was listed by the Chronicle of the Horse as one of the "50 Most Influential Horseman of the 20th Century," and he is a Hall of Fame inductee of both the United States Eventing Association and Culver Military Academy, which he attended. Wofford is the author of Training the 3-Day Event Horse and Rider; Gymnastics: Systematic Training for Jumping Horses; Modern Gymnastics, Take a Good Look Around; 101 Eventing Tips; and Cross-Country with Jim Wofford. He lives and trains at his farm in Upperville, Virginia, and travels extensively, teaching and giving clinics (jimwofford.blogspot.com).