Working in the Shadows: A Year of Doing the Jobs (Most) Americans Won't Do (Paperback) 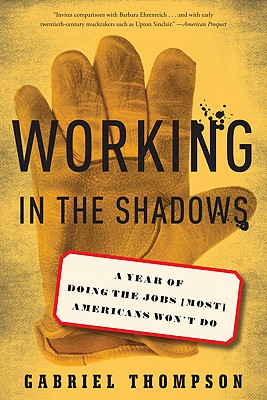 Working in the Shadows: A Year of Doing the Jobs (Most) Americans Won't Do (Paperback)


Available to Order - Usually Arrives in Our Store in 4 to 7 Days
What is it like to do the back-breaking work of immigrants? To find out, Gabriel Thompson spent a year working alongside Latino immigrants, who initially thought he was either crazy or an undercover immigration agent. He stooped over lettuce fields in Arizona, and worked the graveyard shift at a chicken slaughterhouse in rural Alabama. He dodged taxis -- not always successfully -- as a bicycle delivery "boy" for an upscale Manhattan restaurant, and was fired from a flower shop by a boss who, he quickly realized, was nuts.

As one coworker explained, "These jobs make you old quick." Back spasms occasionally keep Thompson in bed, where he suffers recurring nightmares involving iceberg lettuce and chicken carcasses. Combining personal narrative with investigative reporting, Thompson shines a bright light on the underside of the American economy, exposing harsh working conditions, union busting, and lax government enforcement -- while telling the stories of workers, undocumented immigrants, and desperate US citizens alike, forced to live with chronic pain in the pursuit of 8 an hour.
Gabriel Thompson writes for New York magazine, the Nation, the Brooklyn Rail, and In These Times. The author of There's No JosÃ©ere, he lives in Brooklyn, New York.