Schwarzenegger Syndrome: Politics and Celebrity in the Age of Contempt (Hardcover) 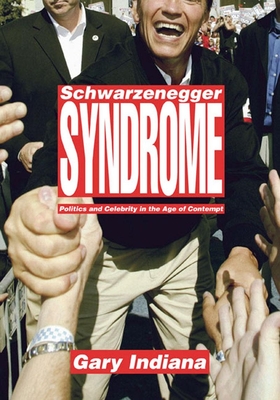 Schwarzenegger Syndrome: Politics and Celebrity in the Age of Contempt (Hardcover)

From the California recall circus, in which Gary Coleman, Larry Flynt, and Arianna Huffington vied with over one hundred other candidates to replace a supposedly inept governor, Arnold Schwarzenegger emerged triumphant. How did this onetime bodybuilding champion and gay pinup, with no political experience and a string of mediocre action movies to his name, come to take over the world's fifth-largest economy?

In The Schwarzenegger Syndrome, celebrated journalist and novelist Gary Indiana makes the case that this tale is a product of a mediasoaked culture in which image matters more than substance. The recall process, a parody of direct democracy, gave Schwarzenegger the chance of a lifetime. With so many candidates in the race, he certainly wasn't the most qualified, the most articulate, or the most credible--but he was the most famous. And for the majority of Californians, that was enough. A witty and biting travelogue through the intersection of celebrity culture with American political life, The Schwarzenegger Syndrome lays bare the dark implications of Schwarzenegger's rise to power in the Golden State.

Gary Indiana, whose essays have appeared in the Village Voice, the Los Angeles Times Book Review, and the London Review of Books, is the author of six novels and several nonfiction books. He lives in New York City and Los Angeles.