Blue Gold: The Fight to Stop the Corporate Theft of the World's Water (Paperback) 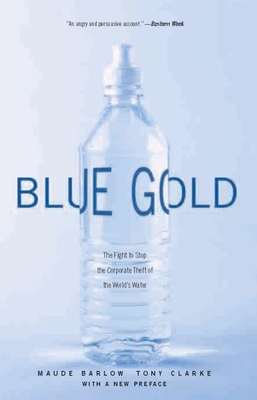 Blue Gold: The Fight to Stop the Corporate Theft of the World's Water (Paperback)


Title unavailable, please email for information.
In this "chilling, in-depth examination of a rapidly emerging global crisis" (In These Times), Maude Barlow and Tony Clarke, two of the most active opponents to the privatization of water show how, contrary to received wisdom, water mainly flows uphill to the wealthy. Our most basic resource may one day be limited: our consumption doubles every twenty years--twice the rate of population increase. At the same time, increasingly transnational corporations are plotting to control the world's dwindling water supply. In England and France, where water has already been privatized, rates have soared, and water shortages have been severe. The major bottled-water producers--Perrier, Evian, Naya, and now Coca-Cola and PepsiCo--are part of one of the fastest-growing and least-regulated industries, buying up freshwater rights and drying up crucial supplies. A truly shocking expos that is a call to arms to people around the world, Blue Gold shows in frightening detail why, as the vice president of the World Bank has pronounced, "The wars of the next century will be about water.