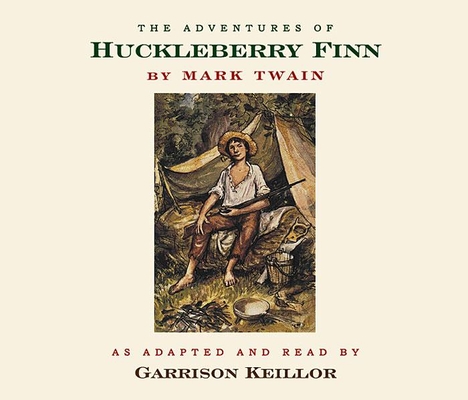 By Garrison Keillor, Mark Twain
$24.95
Available to Order - Usually Arrives in Our Store in 4 to 7 Days

First published in 1884, Mark Twain's The Adventures of Huckleberry Finn is a masterpiece of world literature. Narrated by Huck himself in his artless vernacular, it tells of his voyage down the Mississippi with a runaway slave named Jim. As the two journey downstream on a raft, Huck's vivid descriptions capture the sights, smells, sounds, and rhythms of life on the great river. As they encounter traveling actors, con men, lynch mobs, thieves, and Southern gentility, his shrewd comments reveal the dark side of human nature. By the end of the story, Huck has learned about the dignity and worth of human life—and Twain has exposed the moral blindness of the "respectable" slave-holding society in which he lives. Huckleberry Finn was Twain's greatest creation. Garrison Keillor approaches it with the respect and affection it deserves. "This is an abridgement of Mark Twain's book, keeping the parts I loved as a boy—Huck's story, the big river at night, the boasting of the raftsmen, the Duke and the Dauphin, the lynching, the feud—and lopping off the last third of the book, where Tom Sawyer comes in and makes a big production of freeing Jim. I had Huck free him instead. If you enjoy the reading, I am sure Mr. Twain will forgive me." —Garrison Keillor

Garrison Keillor is America’s favorite storyteller. For more than 35 years, as the host of A Prairie Home Companion, he has captivated millions of listeners with his weekly News from Lake Wobegon monologues. A Prairie Home Companion is heard on hundreds of public radio stations, as well as America One, the Armed Forces Networks, Sirius Satellite Radio, and via a live audio webcast.

Keillor is also the author of several books and a frequent contributor to national publications including Time, The New Yorker, and National Geographic, in addition to writing his own syndicated column. He has been awarded a National Humanities Medal from the National Endowment of the Humanities. When not touring, he resides in St. Paul, Minnesota.

MARK TWAIN (1835-1910), was born Samuel Langhorne Clemens, was an American humorist, writer, and lecturer who is known and celebrated around the world. His many literary masterpieces include The Adventures of Tom Sawyer (1876), The Prince and the Pauper (1882), Life on the Mississippi (1883), and The Adventures of Huckleberry Finn (1885).