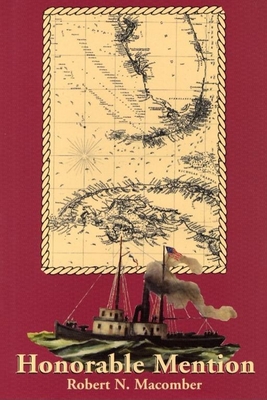 This is book number 3 in the Honor series.

Robert Macomber's Honor series of naval fiction follows the life and career of Peter Wake in the U.S. Navy during the tumultuous years from 1863 to 1901. Honorable Mention is the third in the series. It's the fall of 1864. The Age of Sail is passing, and Lt. Peter Wake finds himself again in Key West, but this time in command of the steamer USS Hunt. He quickly plunges into action as he chases a mystery ship during a tropical storm off Cuba, deals with a seductively dangerous woman during a mission in enemy territory ashore, confronts death to liberate an escaping slave ship, and comes face to face with the enemy's most powerful warship in Havana's harbor. Wake is no longer alone in this dangerous world. His wife Linda, hiding in a pro-Union camp on Useppa Island, gives him a future to look forward to as the war nears its end. But then in January 1866, as most Union soldiers are preparing to go home, a powerful ocean raider shows up in a remote corner of the Caribbean, and Wake finds that for some the war is not over yet. The first book in the series, At the Edge of Honor, received the 2003 Patrick D. Smith Literary Award for Best Historical Novel of Florida, and the second, Point of Honor, was named the 2003 recipient of the John Esten Cook Literary Award for Best Work in Southern Fiction.His sixth novel, A Different Kind of Honor, won the highest national honor in his genre: the American Library Association's 2008 W. Y. Boyd Literary Award for Excellence in Military Fiction.