At the Edge of Honor (Hardcover) 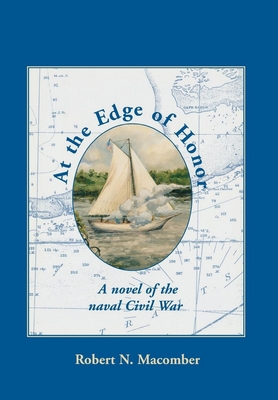 At the Edge of Honor (Hardcover)

This is book number 1 in the Honor series.

Robert Macomber's Honor series of naval fiction follows the life and career of Peter Wake in the U.S. Navy during the tumultuous years from 1863 to 1901. At the Edge of Honor is the first in the series and winner of the Patrick D. Smith Literary Award for Best Historical Novel of Florida. The year is 1863. The Civil War is leaving its bloody trail across the nation as Peter Wake, born and bred in the snowy North, joins the U.S. Navy as a volunteer officer and arrives in steamy Florida for duty with the East Gulf Blockading Squadron. The idealistic Peter Wake has handled boats before, but he's new to the politics and illicit liaisons that war creates among men. Assigned to the Rosalie, a tiny, armed sloop, Captain Wake commands a group of seasoned seamen on a series of voyages to seek and arrest Confederate blockade-runners and sympathizers, from Florida's coastal waters through to near the remote out-islands of the Bahamas. Wake risks his reputation when he falls in love with Linda Donahue, whose father is a Confederate zealot, and steals away to spend precious hours with her at her Key West home. Their love is tested as Wake learns he must make the ugly decisions of war even in a beautiful, tropical paradise-decisions that take him up to the edge of honor.
Robert N. Macomber is an internationally recognized, award-winning writer, lecturer, expedition leader, and researcher of history specializing in Victorian & Edwardian periods. Recently named the "2020 Writer of the Year" by the Florida Writers Association, Macomber is best known as the author of the acclaimed Honor Series of naval novels and is proud to have readers across the globe. His awards include the W. Y. Boyd National Literary Award for Excellence in Military Fiction (A Different Kind of Honor), the Florida Genealogy Society's Outstanding Achievement Award for his nonfiction work on Florida's maritime history, the Patrick D. Smith Literary Award for Best Historical Novel of Florida (At the Edge of Honor & Honoring The Enemy), and the Florida Book Awards' Silver Medal (An Honorable War), and Gold Medal (Honoring The Enemy) both in Popular Fiction, to name a few. Macomber travels extensively to give lectures and have research experiences which add unique flavor on the page and on the stage. When time permits, he enjoys sailing among remote islands and cooking the exotic cuisines from his novels.