All That Man Is: A Novel (Hardcover) 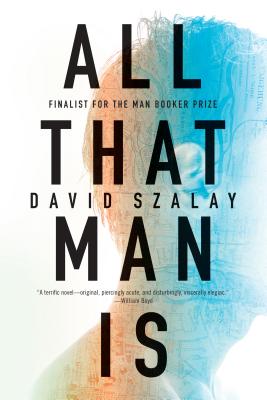 By David Szalay
$26.00
Special Request - May Not Be Available

“All That Man Is was recently longlisted for the Man Booker Prize, and with good reason. The novel's parade of characters, ranging from teenagers to a man in his twilight years, when taken as a whole, represents an 'everyman' in whom readers can easily see pieces of themselves. With prose reminiscent of Amis, Kundera, and Nabokov, Szalay offers a collection of related stories that speak to the mundane qualities of modern life with a sympathetic tone, a reflection of our struggle to move forward in a world increasingly unfamiliar to most of us, but not without hope.”
— Tom Beans (E), Dudley's Bookshop Cafe, Bend, OR

A magnificent and ambitiously conceived portrait of contemporary life, by a genius of realism

Nine men. Each of them at a different stage in life, each of them away from home, and each of them striving--in the suburbs of Prague, in an overdeveloped Alpine village, beside a Belgian motorway, in a dingy Cyprus hotel--to understand what it means to be alive, here and now. Tracing a dramatic arc from the spring of youth to the winter of old age, the ostensibly separate narratives of All That Man Is aggregate into a picture of a single shared existence, a picture that interrogates the state of modern manhood while bringing to life, unforgettably, the physical and emotional terrain of an increasingly globalized Europe. And so these nine lives form an ingenious and new kind of novel, in which David Szalay expertly plots a dark predicament for the twenty-first-century man.

Dark and disturbing, but also often wickedly and uproariously comic, All That Man Is is notable for the acute psychological penetration Szalay brings to bear on his characters, from the working-class ex-grunt to the pompous college student, the middle-aged loser to the Russian oligarch. Steadily and mercilessly, as this brilliantly conceived book progresses, the protagonist at the center of each chapter is older than the last one, it gets colder out, and All That Man Is gathers exquisite power. Szalay is a writer of supreme gifts--a master of a new kind of realism that vibrates with detail, intelligence, relevance, and devastating pathos.

David Szalay was born in Canada in 1974. His first novel, London and the South-East, won the Betty Trask Prize and the Geoffrey Faber Memorial Prize. His second novel, The Innocent, was published by Jonathan Cape in 2009. He lives in London.

“David Szalay writes with voluptuous authority. He possesses voice rather than merely style, and you climb into his new novel, All That Man Is, as if into an understated luxury car. The book has a large, hammerlike engine, yet it is content to purr. There’s a sense of enormous power held in reserve. . . . He is an exceedingly gifted [writer] who can move in any direction he wishes. . . . Mr. Szalay’s prose is exacting without being fussy. . . . Mr. Szalay’s own stream of perception never falters in its sensitivity and probity. This book is a demonstration of uncommon power. It is a bummer, and it is beautiful.”—The New York Times

“Szalay's prose. . . is frequently brilliant, remarkable for its grace and economy. He has a minimalist's gift for the quick sketch, whether of landscapes or human relationships. He studs his pages with sometimes startlingly lovely images. . . . [ All That Man Is] has a new urgency now that the post-Cold War dream of a Europe of open borders and broad, shared identity has come under increasing question.”—Garth Greenwell, The New York Times Book Review

"[David Szalay] has an admirable fearlessness for swiftly entering invented fictional worlds. . . . In canny, broad strokes, full of intelligently managed detail, each story funds its new fictional enterprise, as if he were calling out, each time, 'Where do you want to go? Poland? Copenhagen? Málaga? Berlin? I can do them all. Let’s go.' . . . His book is also bracingly unsentimental about male desire and male failure. . . . Intensely readable. . . . After several hundred pages of great brilliance and brutal simplicity, here at last is a deeper picture of all that man is, or all that he might be."
—James Wood, The New Yorker

“Szalay does so much and so well that we come to view his snapshots of lives as brilliant, captivating dramas."
—Star Tribune (Minneapolis)

“These closely observed, untitled accounts are unnerving and compelling, and have a haunting cumulative effect. . . . Though we know them each briefly, these men are so authentic — and, frequently, so hapless — that they earn our sympathy. . . . In this remarkable book, Szalay pursues an essential truth, important to recognize in our globalizing times: The geographies change, yet the self remains. Whoever and however old a man is, he must face his life. And live it.”—San Francisco Chronicle

“Blending the personal, often plainly repressed nature of these men’s experiences with Szalay’s minimalist, red-eyed observations of the textures of 21st-century Europe, the novel reads like what Hemingway might have called In Our Time had he written it 90 years later.”—Los Angeles Review of Books

“Novels have chapters and stories are gathered into collections, but All That Man Is looks to hover between the two, and blurring or disturbing that distinction is precisely what this book is about. . . . All That Man Is uses its own peculiar shape to define both the variety and unity of its characters’ collective life. It’s a book to go on with, the kind that makes a career worth watching.” —New York Review of Books

“Szalay is a sophisticated, well-travelled writer with a sharp eye for the self-deceived, the ambitious, and the maimed. His gift, as has been noted by many reviewers, is that he can dissect his characters but never lose respect for them. As blind or guilty, callow or brutal as they are, their creator finds their dignity. . . . [His] characters don’t expect transcendence in this world: rather they nose up against desires that work like distorting mirrors, ones that bend in reflection to questioning gazes. There are extraordinary moments, epiphanies, to use again an over-used term, that make real the condition that man is in.”—Commonweal Magazine

“Szalay’s scenes are deftly conceived, and imbue a quiet, delicate elegance. . . . [He] paints a bleak picture of All That Man Is, but there is art in the telling.”—Electric Literature

“A unique, challenging book that tells their stories from youngest to oldest, it is a fascinating and sometimes disturbing look at common experiences between different classes and what it means to be a man in the modern world.”—BookRiot

“Without exception, the stories—subtle, seductive, poignant, humorous—bear witness to the alienation, self-doubt, and fragmentation of contemporary life; each succeeds on its own while complementing the others. Szalay’s riveting prose and his consummate command of structure illuminate the individual while exploring society’s unsettling complexity. In 2013, Szalay was named as one of Granta’s Best of Young British Novelists. This effort exceeds even that lofty expectation.”—Publishers Weekly, starred review

“A tightly woven, precisely observed novel in stories. . . . The book's conceit is imaginative, its architecture impressive. . . . Szalay writes with subtlety and pathos about these flawed and floundering figures. . . . A grim but compelling composite portrait by a talented writer.”—Kirkus Reviews

“[Szalay’s approach] largely eschews fashionable depictions of the predatory male psyche in favour of a more nuanced presentation that does not deny the avaricious or unattractive aspects of men, but also displays an empathetic understanding of human fallibility and longing. The men who populate Szalay’s fiction are often arrogant and self-aggrandizing, but their attitudes are rooted in a deep existential dread and, finally, an abiding and unavoidable sadness.”—The Globe and Mail (Canada)

“An astute an entertaining survey of the state of the modern European male. . . . Existential unease made enjoyable, insightful and all too recognisable.”—Financial Times (UK), Summer Books 2016

“[David Szalay] is capable of conjuring tenderness from any situation. . . . [Readers] will find a great deal to enjoy in these pages, and further evidence that Szalay. . . is one of the best fortysomething writers we have.”
—The Guardian (UK)

“Cleverly conceived, authoritative, timely and (in a good way) crushing. . . . There is a cheerful and ghastly sordidness to everything, and Szalay’s prose with its ruthlessly banal dialogue, arm-twisting present tense, shard-like fragments, and every other page or so an irresistibly brilliant epithet or startlingly quotable phrase, lets nothing go to waste.”
—London Review of Books (UK)

“Each story grips the reader by the throat. We fully inhabit their progression of heroes and finally face the dreadful truth of the human condition: that nothing is eternal, not us, not our children, the human race, the Earth nor the stars. Rarely has it been so brilliantly and chillingly spelled out.”—Daily Mail (UK)

“Profound, sometimes moving and often blackly comic, All That Man Is delights even as it unsettles. It’s another bravura performance from Szalay.”—The National (UK)

“Nobody captures the super-sadness of modern Europe as well as Szalay. . . . The predicaments of the various tormented men come together to produce a rich exploration of male vulnerability. . . . With All That Man Is, [Szalay] emerges as a writer with a voice unlike any other.”—The Spectator (UK)

“Szalay’s writing is exact and true and always subtly intelligent; this book is bracing and thrilling and chilling.”—Tessa Hadley