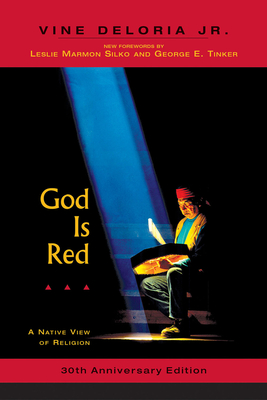 
On Our Shelves Now
First published in 1972, Vine Deloria Jr.'s God Is Red remains the seminal work on Native religious views, asking new questions about our species and our ultimate fate. Celebrating three decades in publication with a special 30th-anniversary edition, this classic work reminds us to learn "that we are a part of nature, not a transcendent species with no responsibilities to the natural world." It is time again to listen to Vine Deloria Jr.'s powerful voice, telling us about religious life that is independent of Christianity and that reveres the interconnectedness of all living things.
Vine Deloria Jr. was named by TIME magazine as one of the greatest religious thinkers of the twentieth century. He was a leading Native American scholar whose research, writings, and teachings on history, law, religion, and political science have not only changed the face of Indian country, but stand to influence future generations of Native and non-Native Americans alike. He has authored many acclaimed books, including Evolution, Creationism, and Other Modern Myths; Red Earth, White Lies; God is Red; Spirit and Reason and Custer Died for Your Sins. Vine Deloria Jr. passed away on November 13, 2005.
"God is Red should be read and re-read by Americans who want to understand why the United States keeps losing the peace, war after war." —From the forward by Leslie Marmon Silko, author of Ceremony

"Deloria's thinking on the subject of religion has lost none of its rage or relevance...since God is Red was first published. This book is broader than its subtitle suggests. It is a trenchant and often witty critique on non-Native religion through Native eyes." —Awe:kon Journal

"...Deloria's handling of the contrast between Christianity and the naturalistic religion of the American Indians is rich in perceptiveness." —Choice