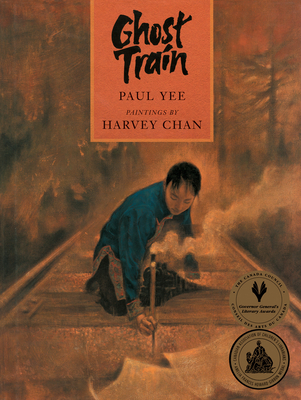 By Paul Yee, Harvey Chan (Illustrator)
$14.95
Available to Order - Usually Arrives in Our Store in 4 to 7 Days

The story of a young Chinese girl arriving in North America only to discover that her father has died building the railway, and how she finds a way through her grief. This powerful, unforgettable and multi-award-winning tale is based on the lives of the Chinese who settled on the west coast of North America in the early 1900s. Left behind in China by her father, who has gone to North America to find work, Choon-yi has made her living by selling her paintings in the market. When her father writes one day and asks her to join him, she joyously sets off, only to discover that he has been killed. Choon-yi sees the railway and the giant train engines that her father died for, and she is filled with an urge to paint them. But her work disappoints her until a ghostly presence beckons her to board the train where she meets the ghosts of the men who died building the railway. She is able to give them peace by returning their bones to China where they were born.

Paul Yee was born in Spalding, Saskatchewan, and grew up in Vancouver's Chinatown. A former archivist, he now writes full time. His books have won many awards and honors, including the Governor General's Award (Ghost Train), the Ruth Schwartz Award (Ghost Train and Roses Sing on New Snow), and the Canadian Library Association Book of the Year Award (Tales from Gold Mountain). He has won the Vancouver Book Award and been shortlisted for the BC Book Prize, and his books have been named to several lists, including NYPL Books for the Teen Age (Dead Man's Gold), ALA Notables and Booklist's Top Ten Historical Fiction. Paul lives in Toronto. Harvey Chan immigrated to Canada from Hong Kong as a teenager. He has won the Ruth Schwartz Children's Book Award three times - with Paul Yee for Roses Sing on New Snow and Ghost Train, and for Music for the Tsar of the Sea by Celia Barker Lottridge. Harvey lives in Toronto, Ontario.