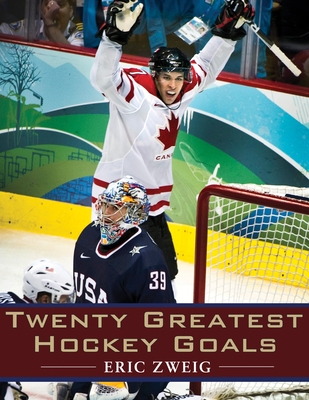 Every hockey fan remembers certain goals scored that stand out from all others. But if one had to name just 20 as the greatest ever accomplished, what would they be?

There's Paul Henderson's third game-winning goal in 1972, the one that clinched the Summit Series for Canada against the Soviet Union. Also Mike Eruzione's upset Miracle on Ice winner for the United States against the Soviets at Lake Placid in 1980. And don't forget the famous Stanley Cup winners by the Toronto Maple Leafs' Bill Barilko in 1951 and the Boston Bruins' Bobby Orr in 1970.

From the goal by the Montreal Victorias against the Winnipeg Victorias in the 1896 Stanley Cup rematch that truly made hockey's most famous hardware a national event, to Wayne Gretzky's 77th goal in 1982 that beat Phil Esposito's single-season record for goals, to Sidney Crosby's golden goal in the 2010 Vancouver Winter Olympics, Zweig serves up a slice of exceptional hockey moments that's sure to provoke heated discussion.

Eric Zweig is a managing editor with Dan Diamond & Associates, consulting publisher to the National Hockey League. His books include Fever Season, Tough Guys: Hockey Rivals in Times of War and Disaster, Crazy Canucks: The Uphill Battle of Canada's Downhill Ski Team, and Star Power: The Legend and Lore of Cyclone Taylor. He lives in Owen Sound, Ontario.

Twenty Greatest Hockey Goals is a coffee table book destined not to collect dust on a table of any sort.