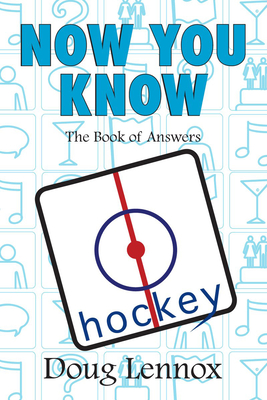 This is book number 13 in the Now You Know series.

As Canadians, we all think we know hockey inside and out, but Doug Lennox, the head referee of Q&A, delivers the score on everything from All-Stars to Zambonis and stickhandles the skinny on who wore the first mask in hockey, how the term hat trick originated, and just where hockey was invented. Along the way, youll discover all sorts of fascinating things about the giants of the game, from Jean Beliveau and Sidney Crosby to Gordie Howe and Alexander Ovechkin.

Doug Lennox is an internationally acclaimed broadcaster, a veteran character actor, a commercial voice artist, and a bestselling author. He has appeared in more than 60 films and television features, including X-Men, Police Academy, Lonesome Dove, and Against the Ropes, and has shared screen time with Meg Ryan, Hugh Jackman, James Garner, Burt Reynolds, Holly Hunter, Charles Bronson, Eric McCormack, Gary Oldman, and myriad others. He lives in Toronto.