Legacy Of Excellence: Mario Lemieux's Impact on the Penguins and the City of Pittsburgh (Paperback) 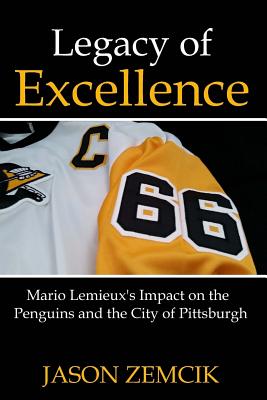 By Jason Zemcik
$9.99
Available to Order - Usually Arrives in Our Store in 4 to 7 Days

Mario Lemieux is one of a rare breed of sports stars whose holistic impact on a city and fan base has transcended mere accomplishments on the stat sheet or in the standings. From leading the Penguins out of the depths of the NHL basement as a teenage phenom to become a championship franchise on par with the city's proud sporting tradition, to overcoming ever-present back pain and a battle with cancer to continue performing at an elite level on the ice, to stepping up to salvage the only franchise he ever played for when it was in a dire financial situation and seemingly destined to leave town, Lemieux as a hockey player and team owner has demonstrated a level of drive and resilience rarely seen even among the best in their sport. Lemieux's efforts off of the ice, most notably through the Mario Lemieux Foundation which he established to raise money and awareness for the fight against cancer following his 1993 bout with Hodgkins disease, as well as his leadership in not only assuming ownership of the Penguins but persisting in his pursuit to get a new arena built and ultimately solidify the team's home in Pittsburgh for the long term future, have time and again demonstrated his commitment to the city and its impassioned fan base. This book chronicles the lasting impact #66 has had on not just the Penguins as a hockey franchise but on all of Pittsburgh.