The Smurf Tales #6: Smurf and Order and Other Tales (The Smurfs Graphic Novels #6) (Paperback) 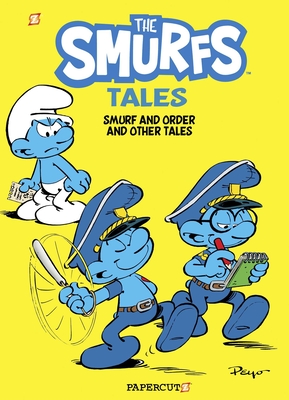 The Smurf Tales #6: Smurf and Order and Other Tales (The Smurfs Graphic Novels #6) (Paperback)

This is book number 6 in the The Smurfs Graphic Novels series.

Join Papa Smurf, Smurfette, and rest of the lovable blue smurfs for classic, three-apple tall adventures, translated into English for the first time. Life in the Smurfs Village is not unlike what seems to be going on in the real world lately. There’s trouble breaking out all over the village! Papa Smurf is tired of always being the sole peacekeeper. He decides to create a Smurf Code and install some smurfs to regulate this “Smurf and Order,” but, will this power go to their heads? Also featuring the Smurfs’ friends Johan and Peewit in an adventure of their own. Johan, the royal page, and Peewit, the court jester, somehow summon “The Night of the Sorcerers,” with a bit of magic know-how from Papa Smurf. Plus: More Smurfs Gags—short comic-strip style Smurf mini-adventures--to keep the laughs coming! A perfect tie-in opportunity with the all-new SMURFS animated series on Nickelodeon!
Peyo created The Smurfs in his comic strip "Johan And Peewit." He wrote and drew several extremely popular comic series in Europe throughout his storied career. In 2008 the country of Belgium celebrated what would have been his 80th birthday by issuing a 5 Euro coin featuring his creation, The Smurfs.