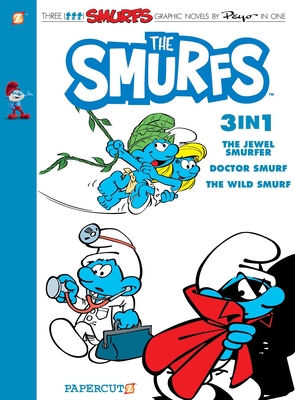 This is book number 7 in the The Smurfs Graphic Novels series.

Collecting timeless smurftastic comic classics by Peyo that inspired hit movies and animated series. First, witness Jokey Smurf’s turn to a life of crime when he becomes “The Jewel Smurfer,” then three apples a day invites “Doctor Smurf” to stay as the latest medical craze sweeps into the Smurf Village. Finally, take a vine ride on the wild side as “The Wild Smurf” is discovered! Is he friend or foe? These true blue stories are sure to be a must for any fan of the Smurfs. A perfect tie-into the all-new Smurfs animated series on Nickelodeon.
Peyo created The Smurfs in his comic strip "Johan And Peewit." He wrote and drew several extremely popular comic series in Europe throughout his storied career. In 2008 the country of Belgium celebrated what would have been his 80th birthday by issuing a 5 Euro coin featuring his creation, The Smurfs.