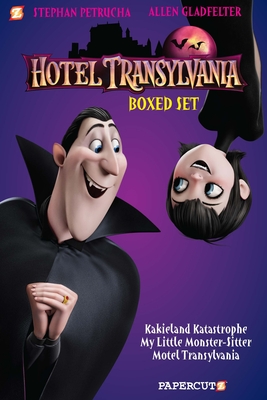 A collection of three full-length graphic novels featuring the horrific staff and guests at Hotel Transylvania, the world’s premier hotel offering monsters a respite from the human world. Join Drac, his family Mavis, human son-in-law Johnny, and grandson Dennis along with the Drac Pack as they cause a “Kakieland Katastrophe” with a local amusement park mogul and then open up “Motel Transylvania” in the Swiss Alps, to surprising, and frustrating, results! Plus, sink your fangs into Mavis’s early years with her friends Wendy, Pedro, and Hank as she becomes “My Little Monster-Sitter.” But what happens when the pups she is supposed to watch disappear in the catacombs below the Hotel Transylvania? Collecting Hotel Transylvania hardcover graphic novels #1-3 in an exclusive slipcase.

STEFAN PETRUCHA is the author of such YA series as Timetripper, Split, and The Rule of Won, as well as NANCY DREW DIARIES, POWER RANGERS, PAPERCUTZ SLICES, and many others from Papercutz. He has written X-Filescomics for Topps, Disney comics for Egmont, and was nominated for a Stoker Award for Kolchak: The Devil in the Details.

ALLEN GLADFELTER wanted to draw comics when he was a kid. Now he’s a grown-up and he draws comics. Some would call that success. So far, Allen has drawn comics for Disney, Pixar, Dreamworks, Sony and quite a few other cool companies; and also done some concept art and character design for mobile game and cartoon animation studios. Allen is also an art teacher.