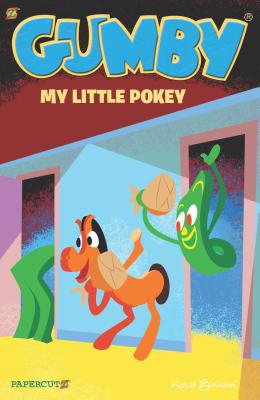 This is book number 3 in the Gumby series.

Gumby, Pokey, Goo and the gang discover all new adventures! From medieval times to far out space, there’s no place Gumby can’t go! But what happens when Gumby jumps into a clock? Can he master time travel? Plus, more Gumby adventures by today’s top comic talent!

Jolyon Yates studied graphic design and illustration at Cambridge and Exeter, and Japanese arts in Sapporo, Japan. He lived in Japan for several years, during which time he contributed comics, articles, and illustrations to magazines such as Anime FX. His first professional comics work was the story "Tancho" for Mangazine. He illustrated the award-winning web comic Revvelations, and he has been a regular contributor to G-Fan. He is very happy to be working on LEGO Ninjago but fears losing the ability to draw fingers, ears, and noses.