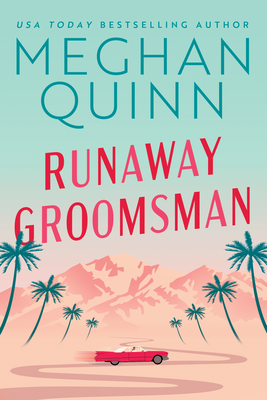 From USA Today and Amazon Charts bestselling author Meghan Quinn comes a heartfelt romantic comedy about new beginnings and finding the romanticized happily ever after in the most unlikely of places.

Hollywood screenwriter Sawyer Walsh knows a good love story when he sees it. But when it comes to real life romance, he's a mess. That's how he finds himself standing at the altar...as his ex-girlfriend ties the knot with his very famous best friend. The pressure, the resentment, the media coverage--it's all too much--and before he knows exactly what he's doing, he's making a run for it, leaving a shocked congregation and flashing cameras in his wake.

Needing to lie low amid the media fallout, Sawyer lands in the charming town of Canoodle, California, where he crosses paths with Fallon Long, who runs the Canoodle Cove Cabins, a family-owned business and Sawyer's new short-term residence. Overwhelmed with renovations and her long list of responsibilities, Fallon is struggling to make ends meet while attempting to bring the cabins back to their original glory. So when Sawyer arrives, she is grateful for the income, but immediately writes him off as just another vapid Hollywood hack, until he begins to prove her wrong at every turn.

As Fallon comes closer to saving the family business, an undeniable bond forms between her and the handsome screenwriter. But the pressures of her family obligations and Sawyer's notoriety might prove to be too much for anyone to handle. Could Canoodle be the setting for a new romance--or is true love just a Hollywood clich ?