The Fortress: The Siege of Przemysl and the Making of Europe's Bloodlands (Hardcover) 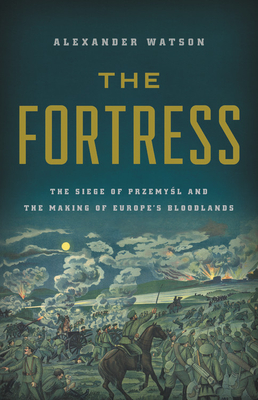 By Alexander Watson
$32.00
On Our Shelves Now

A prizewinning historian tells the dramatic story of the siege that changed the course of the First World War
In September 1914, just a month into World War I, the Russian army laid siege to the fortress city of Przemysl, the Hapsburg Empire's most important bulwark against invasion. For six months, against storm and starvation, the ragtag garrison bitterly resisted, denying the Russians a quick victory. Only in March 1915 did the city fall, bringing occupation, persecution, and brutal ethnic cleansing.
In The Fortress, historian Alexander Watson tells the story of the battle for Przemysl, showing how it marked the dawn of total war in Europe and how it laid the roots of the bloody century that followed. Vividly told, with close attention to the unfolding of combat in the forts and trenches and to the experiences of civilians trapped in the city, The Fortress offers an unprecedentedly intimate perspective on the eastern front's horror and human tragedy.

Alexander Watson is professor of history at Goldsmiths, University of London. He is the author of Ring of Steel: Germany and Austria-Hungary in World War I, which won the Wolfson History Prize and the Guggenheim-Lehrman Prize in Military History, and Enduring the Great War, winner of the Fraenkel Prize.

"The Fortress takes us into the tense, claustrophobic atmosphere of the front-line in a crucial few months of the war...Watson's book is an impressive telling of a story almost entirely unknown, and it makes clear how much we have yet to learn about the first world war away from the western front."—Mark Mazower, Financial Times

"Watson's splendid book combines great evocative power (and flashes of sharp humour) with the ethical authority of the best history writing. The story it tells is unsettling, because it resists any attempt to encompass the death and violence of war within a narrative of redemption. It recalls instead a war that never really ended, but rather spilled out into cascades of further violence whose toxic effects are still with us today."—Guardian (UK)

"Watson's account of these men's experience of battle is a brilliant distillation of their letters, diaries and memories. The voices of the siege convey its horror and the terror of men who had to endure it and suppress their fear of death... The vividly written and well-researched The Fortress is a masterpiece. It deserves to become a classic of military history."—The Times (UK)

"[The Fortress] is excellent history, a marvelously readable, though tragic, story of its time and of how the clock can be made to turn backwards under siege conditions; and in its account of the Habsburg commanders' unshakable vanity, philandering and cockiness it has plenty of modern resonances as a parable of arrogant exceptionalism, imperial conceit and perilous isolationism."—The Daily Telegraph (UK)

"The Fortress is based on extraordinarily impressive research, yet is also vivid, imaginative, and humane. It recaptures one of the most terrible episodes in a terrible war, which -- as Watson rightly argues -- presaged even greater horrors to come."—David Stevenson, London School of Economics and Political Science

"Przemysl, Habsburg Austria's easternmost fortress, lay in Galicia, a flat borderland between the turbulent German, Austrian, and Russian empires. Watson reconstructs the Russian siege in engrossing detail, and also proves that the eastern 'bloodlands' later ravaged by the Nazis and Soviets had already been desolated once before -- during World War I and its chaotic aftermath, when the Russians and Austro-Hungarians, desperate to hold Galicia, taught Hitler and Stalin how to weaken and destroy unwanted peoples like the Jews or Ukrainians."—Geoffrey Wawro, author of A Mad Catastrophe: The Outbreak of World War I and the Collapse of the Habsburg Empire

"Przemysl is best known for its challenges to orthography and pronunciation. But Watson contextualizes the history of this remote Habsburg fortress-city from its beginnings as a strategic pivot to its development as a focal point for overlapping imperial and nationalist aspirations. The defining event was the great siege of 1914, whose everyday routines and long term consequences Watson presents with a verve and clarity making this a must read for students of the Great War in the east."—Dennis Showalter, professor emeritus, Colorado College

"There is a great deal more to this book than an account of the longest siege of the Great War, one that stalled the Russian advance and saved the Central Powers from defeat in 1914. It reveals, in microcosm, everything that was mad, bad and dangerous about the Austro-Hungarian Empire in its final stages... This is a hugely enjoyable book that anyone seeking to make sense of the dark side of 20th century Europe would do well to read."—Adam Zamoyski, Literary Review