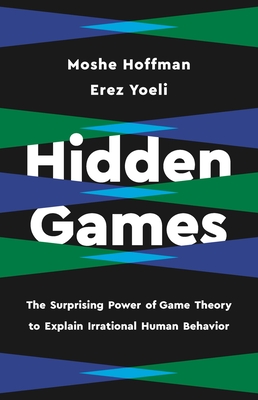 We like to think of ourselves as rational. This idea is the foundation for classical economic analysis of human behavior, including the awesome achievements of game theory. But as behavioral economics shows, most behavior doesn’t seem rational at all—which, unfortunately, casts doubt on game theory’s real-world credibility.

In Hidden Games, Moshe Hoffman and Erez Yoeli find a surprising middle ground between the hyperrationality of classical economics and the hyper-irrationality of behavioral economics. They call it hidden games. Reviving game theory, Hoffman and Yoeli use it to explain our most puzzling behavior, from the mechanics of Stockholm syndrome and internalized misogyny to why we help strangers and have a sense of fairness.

Fun and powerfully insightful, Hidden Games is an eye-opening argument for using game theory to explain all the irrational things we think, feel, and do.

Moshe Hoffman is a research scientist at the Max Planck Institute for Evolutionary Biology, a research fellow at MIT’s Sloan School of Management, and a lecturer at Harvard's department of economics. His research focuses on using game theory, models of learning and evolution, and experimental methods to decipher the motives that shape our social behavior, preferences, and ideologies. He lives in Lubeck, Germany.  ​Erez Yoeli is a research scientist at MIT's Sloan School of Management, the director of MIT’s Applied Cooperation Team (ACT), and a lecturer at Harvard’s department of economics. His research focuses on altruism: understanding how it works and how to promote it. Yoeli collaborates with governments, nonprofits, and companies to apply the lessons of this research towards addressing real-world challenges. He lives in Cambridge, Massachusetts.

“This important book applies game theory to numerous human social dilemmas from love and marriage to homicide and war.”—Michael Shermer

"Hidden Games is a pair of x-ray specs for your mind; it gives you the ability to penetrate surfaces and see what's going on at a deeper level. And the writing is as good as the ideas, which is saying something."—Andrew McAfee, author of More from Less and coauthor of The Second Machine Age

"You’ll find the passion for game theory in every page of this brilliant book, which is packed with fresh and clear insights that will change the way you think about the world."—Uri Gneezy, co-author of The Why Axis

“Skillfully wielding the instruments of game theory, Hoffman and Yoeli entertainingly cut away the veneer of social life. The duo delivers a penetrating look at the cold logic shaping the puzzling patterns that pervade our actions and communities.” —Joe Henrich, author of The WEIRDest People in the World

“Hidden Games is a fascinating tour of how game theory can explain the intricacies and quirks of human behavior; and Hoffman and Yoeli are expert guides. This is a book I will come back to again and again.” —Nichola Raihani, author of The Social Instinct

“Hidden Games is a great read. Hoffman and Yoeli show how widespread but puzzling behavior can result from self-interest, explaining subtle, important ideas in a snappy, accessible style.”—Rob Boyd, author of A Different Kind of Animal

"This is one of those books that you pick up and then can't put down; next thing you know, you’ve been reading for hours and forgotten to go to bed (true story). Filled with quirky facts and perspective-shifting insights, Hidden Games explains some of human beings' most puzzling behavior with one of the most powerful theories ever devised: game theory." —Steve Stewart-Williams, author of The Ape that Understood the Universe

"In this fascinating book, Hoffman and Yoeli show how the tools of economics can be used to understand a wide range of real-world phenomena. The authors show time and again that many types of human behavior which seem inconsistent with consciously rational behavior can be understood once we realize that those same forces are operating below the surface.  Indeed, this book shows the magic of what is hidden from view."

—Kevin M. Murphy, MacArthur Fellow and Professor of Economics at the Booth School of Business, University of Chicago