Mad in America: Bad Science, Bad Medicine, and the Enduring Mistreatment of the Mentally Ill (Paperback) 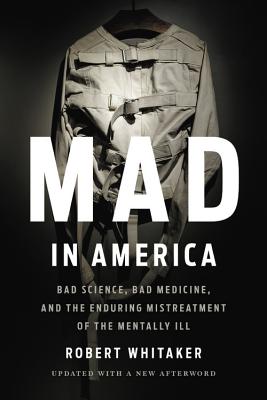 Mad in America: Bad Science, Bad Medicine, and the Enduring Mistreatment of the Mentally Ill (Paperback)


Available to Order - Usually Arrives in Our Store in 4 to 7 Days
An updated edition of the classic history of schizophrenia in America, which gives voice to generations of patients who suffered through "cures" that only deepened their suffering and impaired their hope of recovery

Schizophrenics in the United States currently fare worse than patients in the world's poorest countries. In Mad in America, medical journalist Robert Whitaker argues that modern treatments for the severely mentally ill are just old medicine in new bottles, and that we as a society are deeply deluded about their efficacy.
The widespread use of lobotomies in the 1920s and 1930s gave way in the 1950s to electroshock and a wave of new drugs. In what is perhaps Whitaker's most damning revelation, Mad in America examines how drug companies in the 1980s and 1990s skewed their studies to prove that new antipsychotic drugs were more effective than the old, while keeping patients in the dark about dangerous side effects.
A haunting, deeply compassionate book -- updated with a new introduction and prologue bringing in the latest medical treatments and trends -- Mad in America raises important questions about our obligations to the mad, the meaning of "insanity," and what we value most about the human mind.
Robert Whitaker's articles on the mentally ill and the drug industry have won several awards, including the George Polk Award for medical writing and the National Association of Science Writers' Award for best magazine article. He is also the author of The Mapmaker's Wife and The Lap of the Gods. He lives in Cambridge, Massachusetts.