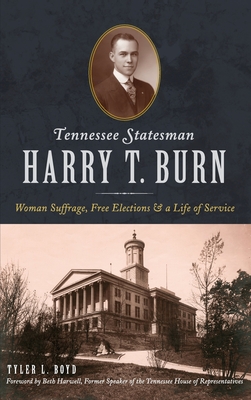 By Tyler L. Boyd, Former Speaker of the Tennessee House of (Foreword by)


Available to Order - Usually Arrives in Our Store in 4 to 7 Days
After reading a letter from his mother, Febb Burn, Harry T. Burn cast the deciding vote to ratify the Nineteenth Amendment to the U.S. Constitution, granting suffrage rights to millions of American women. Born and raised in McMinn County, he served in Tennessee government in various capacities for many years, including terms in the state senate and as delegate to state constitutional conventions. His accomplishments include helping secure universal suffrage rights, drafting clean election laws and leading successful careers in law and banking. He encountered more controversies in his career, such as an unsuccessful gubernatorial bid, election fraud and implementation of state legislative reapportionment. Burn's great-grandnephew, Tyler L. Boyd, chronicles the life and legacy of a Tennessee legend in this never-before-told life story.