Tanking to the Top: The Philadelphia 76ers and the Most Audacious Process in the History of Professional Sports (Paperback) 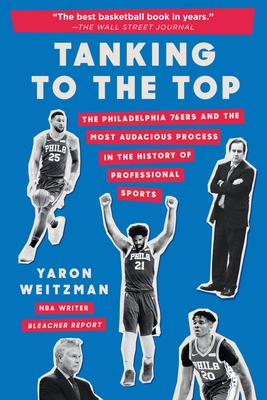 Tanking to the Top: The Philadelphia 76ers and the Most Audacious Process in the History of Professional Sports (Paperback)


Available to Order - Usually Arrives in Our Store in 4 to 7 Days
Enter the City of Brotherly Love and see how the NBA's Philadelphia 76ers trusted The Process–using a bold plan to get to first by becoming the worst.

When a group of private equity bigwigs purchased the Philadelphia 76ers in 2011, the team was both bad and boring. Attendance was down. So were ratings. The Sixers had an aging coach, an antiquated front office, and a group of players that could best be described as mediocre.

Enter Sam Hinkie—a man with a plan straight out of the PE playbook, one that violated professional sports' Golden Rule: You play to win the game. In Hinkie's view, the best way to reach first was to embrace becoming the worst—to sacrifice wins in the present in order to capture championships in the future. And to those dubious, Hinkie had a response: Trust The Process, and the results will follow.

The plan, dubbed "The Process," seems to have worked. More than six years after handing Hinkie the keys, the Sixers have transformed into one of the most exciting teams in the NBA. They've emerged as a championship contender with a roster full of stars, none bigger than Joel Embiid, a captivating seven-footer known for both brutalizing opponents on the court and taunting them off of it.

Beneath the surface, though, lies a different story, one of infighting, dueling egos, and competing agendas. Hinkie, pushed out less than three years into his reign by a demoralized owner, a jealous CEO, and an embarrassed NBA, was the first casualty of The Process. He'd be far from the last.

Drawing from interviews with nearly 175 people, Tanking to the Top brings to life the palace intrigue incited by Hinkie's proposal, taking readers into the boardroom where the Sixers laid out their plans, and onto the courts where those plans met reality. Full of uplifting, rags-to-riches stories, backroom dealings, mysterious injuries, and burner Twitter accounts, Tanking to the Top is the definitive, inside story of the Sixers' Process and a fun and lively behind-the-scenes look at one of America's most transgressive teams.

Including exclusive interviews with Joel Embiid, Ben Simmons, and Coach Brett Brown, Sam Hinkie, and more.
Yaron Weitzman is an award-winning NBA writer for Bleacher Report and a former senior writer for the magazine SLAM. He has an MFA in Writing from Manhattanville College and his work has also been published in ESPN, the New Yorker, New York Magazine, the Ringer, the Athletic, SB Nation, Tablet Magazine, and more.